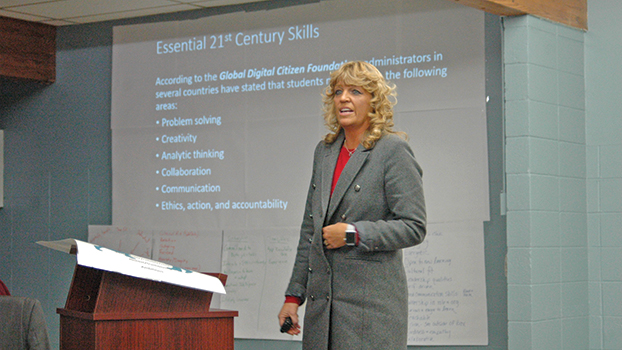 CASSOPOLIS — A partnership is blooming between the Cassopolis village government and public schools.

Monday evening, the Cassopolis Village Council and the Cassopolis Board of Education hosted a joint meeting in place of each entity’s usual monthly meeting. Officials said the meeting was meant to showcase a partnership between the village and the schools.

“This is all part of our collaboration,” said Cassopolis Public Schools Superintendent Angela Piazza. “We thought a meeting would be a great way to bring everyone together.”

Village Manager Emilie Sarratore said the partnership meeting was symptomatic of a push the village council has been making to collaborate with other groups and entities within the village.

“For the school board, our meetings are on the same night at the same time, so we don’t get a lot of crossover,” Sarratore said. “So, we thought this was a good opportunity for everyone to get caught up on what we are doing.”

The main focus of the meeting was a presentation led by Piazza and Sarratore, which highlighted the benefits of a partnership between the village and the schools.

“We believe in strong schools, strong community,” Sarratore said during the presentation. “We know that if our village is strong, the schools will be strong and vice versa. … So, we have been working on ways to bring the two together.”

The presentation also announced a new project the village and schools have been working on together. Piazza and Sarratore recently worked together on a rural development grant, which, should the schools be awarded it, would be used to create a student-run coffee shop. The shop would be used as a form of project-based learning, where students would be involved in every aspect of the shop, from design to management.

“We want the students to be learning,” Sarratore said. “We want the kids to be tied to our community, and we thought what better way to do that than with a coffee shop.”

Sarratore said that the project was one of the main reasons for hosting the joint meeting.

“With this project launching, we wanted to make sure that both boards were on board and knew what was going on,” Sarratore said. “We want to keep everyone in the loop going forward.”

With many Cassopolis residents in attendance at the shared meeting, Piazza said the event was a success that she would like to see repeated.

“We’d like to do this maybe annually, at the least,” she said. “We want the community to know that the village and the schools are working together.”

DOWAGIAC — Cass County Courts and the Pokagon Band of Potawatomi Indians are embarking on a new collaboration. The courts... read more