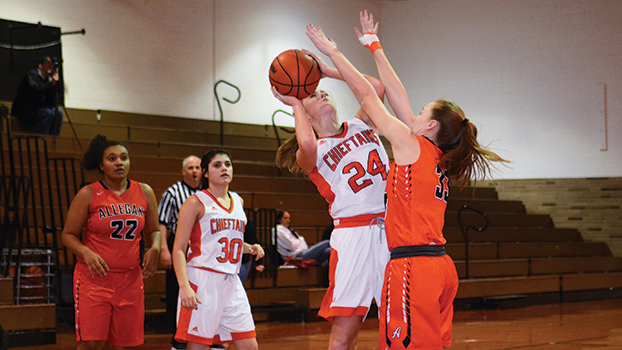 DOWAGIAC — The Dowagiac girls basketball team lost another game it probably should have won Tuesday night.

The Chieftains (4-11) got off to a quick start, but could not maintain the momentum as visiting Allegan rallied for a 54-44 win over Dowagiac in a Wolverine Conference non-divisional matchup.

Turnovers continue to plague the Chieftains, as well as defensive lapses, which allowed the Tigers (5-9) to score easy baskets in the paint.

After being outscored by six points in the opening eight minutes, Allegan outscored Dowagiac 46-30 over the final three quarters.

“We came out and played our best quarter of the year,” Dowagiac coach Brent Nate said. “We did what we wanted to do, and we hit some shots. It was not like we were shooting lights out, but we scored on effort plays.”

Dowagiac only scored four points in the second quarter when Allegan took control of the game.

The Tigers poured in 15 points to open up a 23-18 halftime advantage and forced the Chieftains to chase them the rest of the contest.

“We stopped making shots and that had a direct effect on our defense,” Nate said. “It was the same old story. We had unforced turnovers. They put zero pressure on us and we still turned it over.”

Dowagiac tried to keep the game close, and for the most part succeeded, but the Tigers slowly pulled away by outscoring the Chieftains by two points in both the third and fourth quarters.

Freshman Allie Conner got hot in the second half and scored 16 of her team-high 18 points in the final 16 minutes.

Conner hit four 3-pointers in the second half as she tried to lead the comeback effort.

“She is a freshman who is playing well for us,” Nate said of Conner. “She was playing well and then she got sick. It has taken a couple of games for her to get her legs back under her, but she is back and she carried us in the second half.”

Nate is hoping that trio can build off of Tuesday night’s performance and give opponents something to worry about defensively.

“Kellyn had some shots she usually makes and Amiyah had some great looks where I thought there was contact and no call,” he said. “Between those three we have to figure out how to turn that into a three-headed monster.”

Dowagiac is on the road until Feb. 22 when it hosts a Wolverine Conference crossover game against an opponent still to be determined.

The Chieftains start their four-game road trip Friday night in Vicksburg. Tipoff is set for 6 p.m.