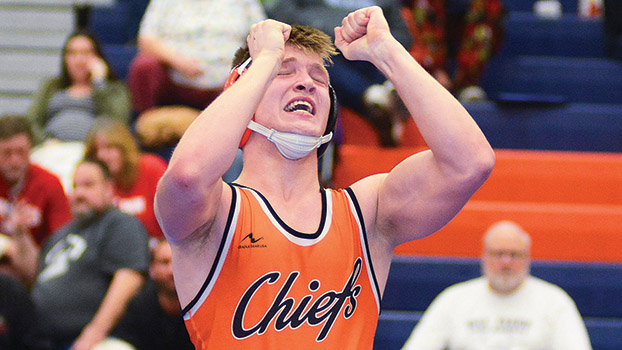 EDWARDSBURG — When Dowagiac’ Justin Lyle injured his knee during his sophomore year, he was not sure if he would ever get back to being the wrestler he wanted to be.

Two years later, and a lot of hard work, Lyle is not only back, he is a Wolverine Conference champion.

The Chieftain senior bumped up from his usual weight class of 171 to 189 pounds on Saturday for the conference tournament at Edwardsburg High School.

Despite moving up a weight class, Lyle was awarded the top seed and a first-round bye.

In the quarterfinals, Lyle pinned Jack Sunnerville of Otsego in just 33 seconds.

In the semifinals, he pinned Zakary Foster of Allegan in 2:40.

His toughest match of the day would come in the finals against Plainwell’s Jacob Payne.

And despite giving up quite a bit of weight to Payne, Lyle was able to come away with another pin, this time in 4:16.

“Being a conference champion is something I never even dreamed of,” Lyle said following his victory. “Especially after my injury sophomore year. Coming back and working. All this work has paid off. Working with bigger guys and better skilled people has been immeasurable.”

Lyle said it was a tough choice to move up and give away so much weight, but the decision was right and more importantly, worth it.

“The one thing I like about going up a weight class is I got to eat food,” he said. “I did not have to cut weight. I just cannot believe this happened. Anything that has gone on this season has been an honor.”

Dowagiac coach Colin Burandt is proud of Lyle for making the decision in order to help the team.

As a result, the Chieftains finished second to two-time champion Edwardsburg after finishing the regular season in third place behind the Eddies and Sturgis.

“He wrestled very well, Burandt said. “It was nice to see him get that conference championship in his senior year. He went up and wrestled a lot tougher, stronger guys and gave him a look to see what he might want to do for districts.”

Lyle not only excels on the wrestling mat, but in the classroom as well as he has been named a finalist for the Michigan High School Athletic Association Scholar-Athlete Award.

The award, now in its 29th year, recognizes top student-athletes who participate in at least one sport that the MHSAA sponsors a postseason tournament for.

Eight scholarships will be awarded in Class B, split evenly between male and female athletes.

The applications are being judged by a 64-member committee of school coaches, counselors, faculty members, administrators and board members from MHSAA member schools.

The Class B recipients will be announced Feb. 13. The 32 winners will be honored by the MHSAA at halftime of the Class C boys basketball finals at the Breslin Center on the campus of Michigan State University March 24.

To be eligible for the award, students must have a cumulative grade point average of 3.50 (on a 4.0 scale) and previously have won a varsity letter in at least one sport in which the MHSAA sponsors a postseason tournament. Students also were asked to respond to a series of short essay questions, submit two letters of recommendation and a 500-word essay on the importance of sportsmanship in educational athletics.

It was at least a super finish

I made the mistake of checking my ESPN app on my phone around 10 p.m. Sunday. When I saw that the... read more