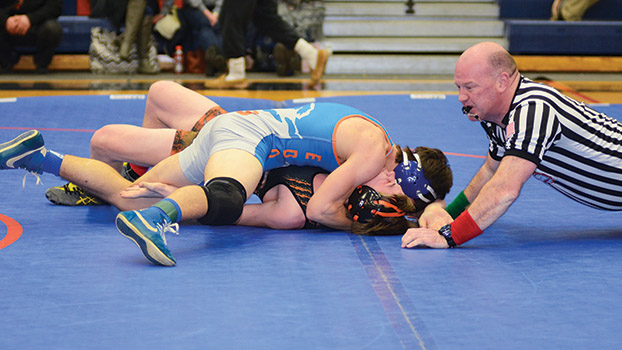 Allegan dominated conference wrestling for years until Edwardsburg knocked the Tigers off their pedestal in 2017.

The Eddies backed up that feat by winning its second consecutive championship Saturday afternoon.

The Eddies, who hosted the league tourney, scored 193.5 points to easily outdistance runner-up Dowagiac, which finished with 159.5 points. Plainwell was third, Sturgis fourth and Otsego fifth.

“I was a little worried there going into the finals,” Edwardsburg coach Jesse Becraft said. “We had a pretty slim lead. But we responded and went 10-for-10 in the placement rounds with eight bonus point victories.”

Shoulder surgery kept Bradley from wrestling as a sophomore.

Bradley, who has never lost a Wolverine Conference Tournament match, said it was great to be able to win the conference championship at home.

“You never know,” Bradley said about missing that one year. “I could have been a four-time champ. But it is what it is and I just had to come out and get the job done today. Being at home, being able to defend our title from last year and accomplish what we wanted to this year is exciting.”

“Nick has been a great kid,” Becraft said. “I expect big things from him the next couple of weeks.”

Also winning championships for the Eddies were Jacob and Caden Reece at 119 and 125 pounds, Jackson Hoover at 130 pounds, Jacob Andrina at 171 pounds and Steven Harris at 285 pounds.

Dowagiac entered the tournament in third place after going 7-2 in dual meets. But by finishing two spots ahead of Sturgis, which was 8-1 during the regular season, the Chieftains claim sole possession of second place.

“It was a good day. “Dowagiac coach Colin Burandt said. “We had a rough final round, but overall I think we wrestled really well.”

Dowagiac had one champion in senior Justin Lyle.

Lyle bumped up a weight class and captured the 189-pound title with a pin of Plainwell’s Jacob Layne in 4:16.

“He wrestled very well, Burandt said. “It was nice to see him get that conference championship in his senior year. He went up and wrestled a lot tougher, stronger guys and gave him a look to see what he might want to do for districts.”

Lyle was more than excited about winning a championship.

“It was a big day,” said Lyle, who suffered a knee injury his sophomore year. “Being a conference champion is something I dreamed of, especially after my injury my sophomore year. All this work has paid off.”

RICHLAND — Lakeshore took the second of four key meeting with Niles as the Lancers won the SMAC Wrestling Championships with 255 points.

The Vikings were second with 231 points, while Battle Creek Lakeview was third with 198, Portage Northern fourth with 167 and Mattawan fifth with 158.

The Vikings will now set their sights on the Division 2 district tournament in Stevensville on Wednesday.

Niles will face Edwardsburg, the two-time Wolverine Conference champion, at 6 p.m. in the semifinals.

Host Lakeshore will face arch rival St. Joseph in the other semifinal.