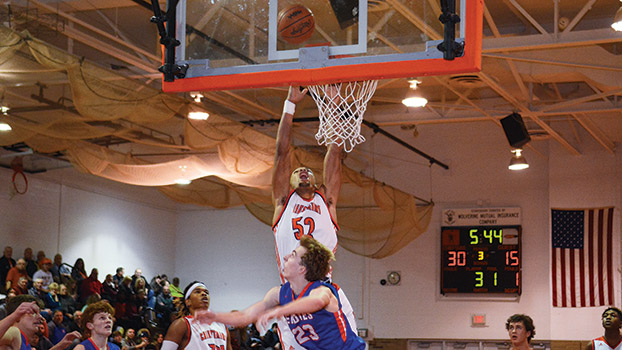 DOWAGIAC — Rebounding from its first Wolverine Conference South Division loss, the Dowagiac boys basketball team turned up the defensive pressure on visiting Edwardsburg and the result was a 54-38 victory Friday night.

The Edwardsburg girls basketball team got off to a hot start and rolled to an easy 58-22 win over the Chieftains.

Dowagiac (9-4, 5-1 South) forced the Eddies, who had won three of their previous four contests, into 32 turnovers and to play at a pace it did not want to against the Chieftains.

Dowagiac came out with a lot of energy, which helped the Chieftains extend its pressure for a full 32 minutes.

“Tonight, our goal was to come out and play hard, fast and physical,” Dowagiac coach Danum Hunt said. “We wanted to make them uncomfortable with the pressure and make them play faster than they wanted to play. We were able to come out and do that from the beginning, and it kind of progressed for us going into the second half.”

Much like the first meeting, Edwardsburg was forced into playing at a faster pace than it intended to.

“When it gets like that, you need to hit some shots,” Edwardsburg coach Steven Wright said. “It at least settles that down. We did not do that. Second half we did and that helps. You play a little bit harder at the defensive end when you make a few shots.”

Wright said the Eddies reached their goal of holding Dowagiac down offensively, but it just was not enough.

“We talked about holding Dowagiac in the low 50s, we would have a shot,” he said. “We did that part. We just could not put the ball in the bucket enough.”

Edwardsburg was led by Mac Gaideski, who scored a game-high 16 points. Ben Kabul finished with six.

The Chieftains travel to Allegan Tuesday night for a non-divisional Wolverine Conference contest.

The Edwardsburg girls basketball team hit all seven of their 3-pointers in the opening half as it opened up a 19-3 first-quarter lead, which it extended to 45-11 by halftime.

Dowagiac had no answers for stopping the hot-shooting Eddies, who improved to 15-1 on the year and 8-0 in the Wolverine South.

“We knew we needed a fast start,” Dowagiac coach Brent Nate said. “And they (Edwardsburg) come out and hit seven threes in the first half. They shot the ball lights out. That is a credit to them. When they shoot the ball like that they are tough to beat.”

Edwardsburg was able to limit what the Chieftains wanted to do offensively, while led to Dowagiac struggling to score points.

The Chieftains trailed 56-15 after three quarters.

“They took out of some things that we wanted to do,” Nate said. “But until we learn how to handle pressure and stop trying to throw over the top of the press, we are going to struggle.”

Kaitlyn Zarycki, one of the top scorers in all of southwest Michigan, finished with a game-high 22 points to lead the Eddies.

EDWARDBURG — Heading into the final round of the Wolverine Conference Wrestling Tournament, Edwardsburg leads the team points with 128.... read more