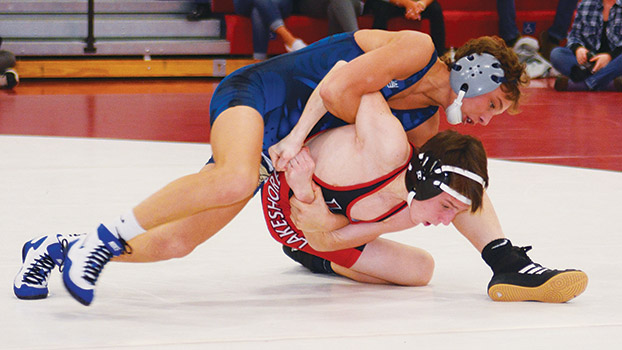 STEVENSVILLE — A battle lost will hopefully lead to a war won for the Niles wrestling team.

The No. 6-ranked Vikings and arch rival Lakeshore, ranked No. 9 in Division 2, squared off for the SMAC West Division championship Wednesday night and the results could not have been any closer.

After Lakeshore’s Cody Carlisle defeated Niles’ Robert Buckland in the final bout of the night, the scoreboard read 31-31. 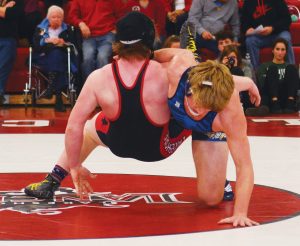 Carlisle was on the verge of scoring a major decision, which would have given the Lancers the 32-31 victory, but as the final seconds ticked away, the veteran Lancer wrestler was hit with a penalty, which reduced his apparent match-winning victory into a scramble to figure out who actually won the match.

“We felt pretty confident with Cody going,” Lakeshore coach Bruce Bittenbender said. “We thought we would get the major but we (ran into a penalty point) and that stuff happens.”

The officials, along with scorekeepers from both teams, gathered at the scoring table and began the process of going through the criteria to decide the winner.

Niles and Lakeshore did not have any unsportsmanlike conduct points deducted, both teams had seven bout victories, each had the same number of pins and there were no technical falls.

The Vikings and Lancers were also tied when it came to the likes of first points and major decisions.

It all came down to the team with the greatest number of near-fall points, which on Wednesday night was Lakeshore.

“I knew it was going to be close,” Bittenbender said. “I thought we lost. It was a great match, a great crowd and a great night for high school wrestling.”

Niles coach Todd Hesson did not expect his team, which like Lakeshore, was missing a couple of starters, to come down to criteria.

“I do not know if I expected that tonight to be honest,” he said. “It was a good dual all the way around. They are a good team. They are a final four team. We’ve got to compete better in some of the weight classes. You try to get through to kids that every point matters. In the end, I think the ninth criteria was near fall. That especially matters. Stay off your back.”

The match, which started with Niles’ Dayton Smith earning a 3-2 victory over Lakeshore’s Jake Taylor at 171 pounds, went back and forth.

The Vikings built a 31-16 lead on the Lancers following Reese Gardner’s 9-6 victory over Sam Prince at 135 pounds.

Ryan Franco, who wrestled at Lakeshore prior to transferring to Niles midway through last season, pinned Jon Gelesko in 1:01 at 119 pounds, Austin Franco pinned Shane Williams in 2:38 at 125 pounds and Javond Ball won by major decision over Justin Crowder 12-3 at 130 pounds.

All the Vikings had to do after the Gardner victory was earn one victory by more than three points or not give up bonus points to the Lancers.

They nearly got the job done, but Lakeshore was able to win the final four bouts to force the tie, and eventually be declared the winners.

Despite the loss, Hesson was pleased with his team’s effort, especially Buckland in that final bout.

“Buck is Buck,” he said. “He is all heart. He goes out and wrestles hard every time. I would take that in every kid in every match. It was an odd finish to it. He wrestled well.”

Lakeshore earned the victory in the first dual match.

The two teams will square off again in Richland at Gull Lake High School as they battle for the SMAC conference championship on Saturday.

The two could potentially meet again next Wednesday in Stevensville in the championship of the Division 2 district tournament.

Niles will face Edwardsburg in the first round beginning at 6 p.m., while Lakeshore will face arch rival St. Joseph in the other semifinal.

“I think Niles and us are (two of the best teams) in the state,” Bittenbender said. “It was going to be close. It will be close next Wednesday. They are a good team with tough kids. We’ve been down to some tiebreakers before but not to the ninth. I’m just going to enjoy the moment.”

DOWAGIAC — Seven thousand. That is the number of students who drop out of high school every day across the... read more