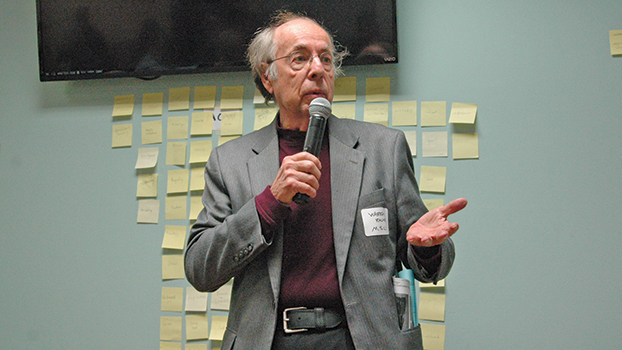 CASSOPOLIS — More than 200 people from all across Cass County filled the Cass County Council on Aging on Decatur Road in Cassopolis Wednesday evening to discuss the future of Cassopolis, the heart of Cass County.

The evening marked first Imagine Cass event to take place, where Cass County officials invited the public to offer input into a revitalization project with Michigan State University of the downtown corridor of Cassopolis.

Imagine Cass is the result of a partnership between three local entities — the county, the EDC and Cassopolis village government — with MSU’s School of Planning, Design and Construction, through the university’s Sustainable Built Environment Initiative. The program, which the university formed in 2013, is designed to help Michigan municipalities address physical planning, design and land use concerns. The SBEI program has worked with several communities in Michigan, including Allegan, Marquette and Cadillac.

MSU officials will take resident feedback into consideration and implement them into a potential visual plan for the county to use. The images will be released to the public in a separate Imagine Cass event to take place in March or April.

“This is a visioning process. We want you to envision the future,” said MSU’s Wayne Beyea to the crowd Wednesday. “What we do going forward is only as good as the information we get tonight.”

On yellow sticky notes placed all around the COA, Cass County residents wrote what they thought of Cassopolis as it currently stands and what they would like to see it become. Dirty to clean. Quiet to bustling. Stagnant to progressive. Vacant to booming. The wall was covered in paper requests of what people would like to see change in Cassopolis.

Some said they would want to see the beach at Stone Lake built up and have Cassopolis be turned into a resort town. Others said they want to see bright colors and a younger presence in the area. Some wanted a coffee shop. Some wanted to preserve the area’s historic buildings. Some wanted more commercial business to be brought to the area. The list goes on and on, with hundreds of ideas being thrown out.

“This isn’t the time to be shy. If there is something you have always wanted, say it,” Beyea said. “We want to gather as many ideas as possible.”

Mary and Kim Hedges, who have lived in Cassopolis for nearly 50 years, said that they hoped the MSU project would bring real change to Cassopolis.

“I would like to see more business and to just see everything reinvigorated,” she said.

Cassopolis Village Manager Emilie Sarratore had her own wish list for the downtown corridor.

“I really want to see a continued momentum [in Cassopolis]. We are really starting to see it and that’s how we get things done,” she said. “I want people to be invested in the community. I want to have festivals for people to show up to. I want people to see our plans.”

The MSU project coincides with the village’s own new master plan work. Sarratore said that village officials would take the ideas and input from the Imagine Cass event into consideration for the master plan work.

Because the Imagine Cass event had such high participation, county and village leaders said they have high hopes for the MSU partnership and hope residents will continue to stay engaged as the process continues.

“You know, [MSU officials] said they usually get about 50 people for these events, and we are right around 200,” Sarratore said. “It’s a great sign for how interested people are in what we are doing. It’s phenomenal.”