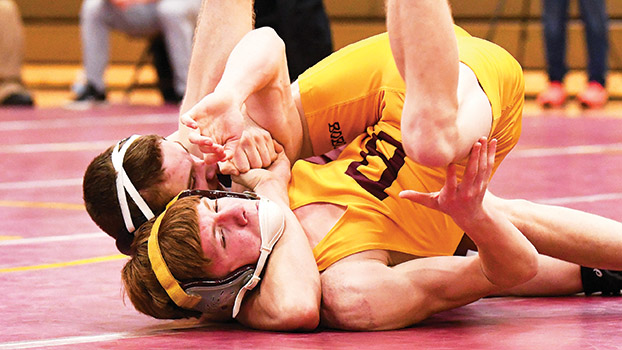 The Bucks, 12-9 overall and 6-1 in the BCS, will now set its sights on the conference tournament at Parchment on Saturday before hosting the Division 3 district tournament on Wednesday.

“It was a back and forth match last night that was a lot of fun to watch,” Buchanan coach Andy Riggs said. “Brandywine and Buchanan is always an amped up dual and both teams were fired up to go. With the win, Buchanan would need to win the individual conference tournament to be able to be co-champions in the conference. We are hoping we can carry the momentum into team districts as we have drawn Constantine in the first round. Our guys know that this is what we work all year for. Everything we have done in December and January is for this Saturday and the upcoming weeks state tournaments.”

The match was close, with both teams winning seven of the 14 weight classes.

Buchanan was able to pull out the victory by picking up three pins and taking advantage of four bouts by forfeit.

Pinning their opponents were Payton organ, who stuck Aaron Lauri in 2:16 at 125 pounds, Adam Eger, who pinned Steven Kendall in 33 seconds at 135 pounds and Richard Defreeze, who pinned Ben McKee at 215 pounds in 1:26.

The Bobcats picked up forfeits at 103 and 119 with Searra Inman and Hunter Heath respectively.

Robert Brown Jr. is a senior on the Niles boys basketball team. What has been one of your greatest accomplishments... read more