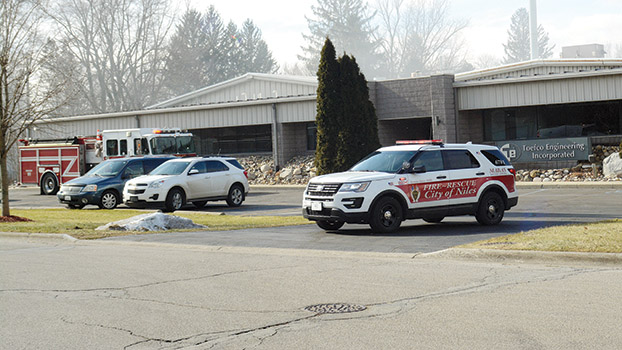 NILES — One maintenance worker was injured when a fire started at the Toefco Engineered Coating Systems, 1220 N. 14th St., on Thursday afternoon.

Authorities responded to the scene of the blaze about 12:30 p.m. Niles Fire Chief Larry Lamb said they are still investigating the cause, but that they believe the fire originated from a media blaster that was inside a back room on the building’s west side. Authorities believe the maintenance worker, who was injured, was making repairs to the machine when the fire occurred, Lamb said.

Lamb said the injured worker was transported to the hospital with burns on to his arms and hands. He was reported to be in stable condition by Thursday afternoon, Lamb said.

It took firefighters about 30 minutes to knock down the fire. They remained on the scene throughout the afternoon to clear the building of smoke.

The business, which engineers spray coating solutions, was shut down Thursday afternoon. Lamb said they will be conducting a building assessment to determine whether or not there will be long term damage to the facility.

“Crews are here working to get the plant up an operational,” Lamb said. “They are doing everything they can to get the stuff turned back on.”

He said the structure seemed unharmed, but that likely the electrical system has been damaged. He did not have an estimate as to the cost of repairs by Thursday afternoon.

Lamb said they contacted Niles High School, which is less than half a mile away and said that school evacuation would not be necessary, because the fire and smoke were under control.

Scott Kucela, a controller for the company, said he was working in the front office of the building when the power went out around 12:20 p.m.

“The lights went out and I knew something was wrong,” Kucela said. “I looked out the window and saw a bunch of smoke. We cleared out the office as soon as we could.”

Kucela said all employees evacuated the building. Kucela said the evacuation was orderly and no one seemed scared.

A school bus arrived after several minutes to help those evacuated get out of the cold. After a roll call, employees were told that they were allowed to go home for the day.

Lamb thanked all participating authorities for their quick response and assistance.

NILES — Niles High School students in Jayson Zoll’s culinary class got a taste of what it is like to... read more