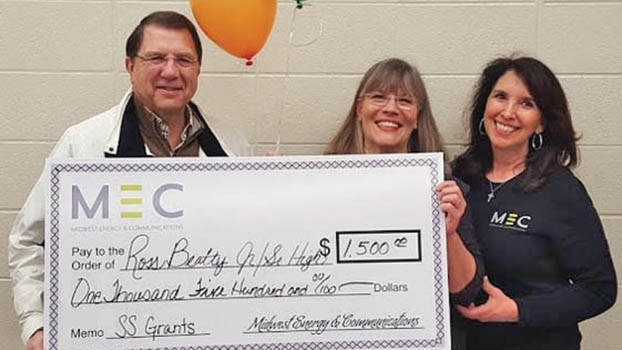 CASSOPOLIS — At 9:30 a.m. Tuesday, despite a lingering morning grog, students in Shelly Johnson’s advanced art class filed into the classroom, trading greetings and jokes with Johnson before they sat down to begin work on their individual projects.

“I have some good kids in that room,” Johnson said. “I really care about them.”

It is this caring that prompted Johnson to apply for a grant the Ross Beatty Jr./Sr. High art department was recently awarded by Midwest Energy and Communications.

The Ross Beatty art program received $1,500 as one of 22 recipients of MEC Strengthening Schools grant. In total, MEC donated $30,000 in awards across their service territory.

“We are so grateful to Midwest,” Johnson said of receiving the award. “It’s amazing what they are doing.”

The money granted to Ross Beatty will be used to purchase a fusing kiln that can work with glass and metal.

“It’s not a necessity,” Johnson said. “But, these kids are very hands on and love to build. This will allow them to build.”

The advanced art class first dabbled in glass fusing last year, when they worked on a couple projects with local artist Robert Clark.

“It was so much fun,” said junior Skylar Westphal of the project last year. “I made this bowl by putting all these different types of glass together, then it all melted together in the kiln. It was really cool.”

The project was so well received by students that Johnson hopes to one day offer a glass and metal fusing class.

“It’s going to start out slow, but the only way to do it is to get started,” she said.

Even if she does not form a full glass/metal fusing class, Johnson said students in the advanced art class will begin to use the kiln for projects as early as March.

Johnson said she is excited to bring the kiln into her classroom, and said that it is something she would not have been able to do without the grant from Midwest.

“This is a lot of money for a teacher to get. Public school budgets are tight, so when we get the opportunity to offer [students] a little more so that they feel special, important, you have to take that opportunity,” she said. “I’ve spent a lot of time building up the art room, picking the right brushes and pen, though they were expensive. [The kiln] will be the next thing that will give [the students] what they need.”

The students of the advanced art class said they were excited about the prospect of the new kiln and the new projects it will allow them to work on.

“[Having access to a kiln] will let us do more hands on projects, which is just a better way to learn,” Westphal said. “You’re just having someone show you how to do something, you are doing it yourself. [The grant] is going to be awesome, because more people will be able to do that.”

Pleased with students’ excitement about receiving the grant from MEC, Johnson said that seeing her students get to learn and create using the new kiln will make all of the work she put into writing the grant proposal worth it.

“Kids are our future. They are the most important thing in this world,” Johnson said. “It is my goal, as a teacher, as an instructor, to make every student in the room feel like the most important. … We need to invest in our kids. Giving them access to things like a kiln can make all
the difference.”

MEC representative Amy Pales said the business was happy to work with the Ross Beatty art program for the grant.

“Education is so imporant and we are happy to help fund it, from basic supplies to more unique items like [the kiln],” Pales said.

Tickets on sale for annual chamber of commerce dinner

EDWARDSBURG — The Edwardsburg Chamber of Commerce is beginning to gear up for one of its biggest events of the... read more