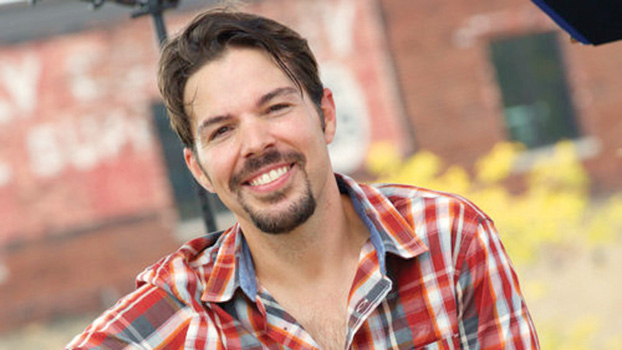 Mike Struwin, the author will be reading his story and singing some songs based of the book during a special story time session at the library Saturday. (Submitted photo)

Local author to read, sing to children at library Saturday

DOWAGIAC — The beauty of the written word and the sweet melody of folk music will come together in perfect harmony at the Dowagiac District Library Saturday.

The downtown institution will host a special story time event with local author and musician Mike Struwin at 11 a.m. that morning, the same day as the Dowagiac Ice Time Festival. Struwin will be reading his debut book, “Campfire Stu & The Backwoods Jamboree,” to youngsters and parents that morning, as well as performing some of the songs he created for the children’s story.

The event is free and open to the public. The library will have several copies of the children’s book available for purchase during the story time.

Struwin, a resident of St. Joseph who works as a speech-language pathologist at Kincheloe and Sister Lakes elementary schools, published “Campfire Stu” last fall, after spending the past several years creating the children’s picture book along with illustrator Eric Kravako.

The book tells the story of the titular character, Stu, a boy who runs away from home one day to pursue his passion for music. During his journey, he encounters several friendly woodland animals who share his love of playing musical instruments and singing.

“I grew up with ‘The Wizard of Oz’ and the ‘Briar Rabbit,’ those kinds of stories,” Struwin said. “I feel like they permeated my own tale. I’ve been told that [my book] has a modern-day fable kind of feel.”

Being a story focused around music, Struwin created and recorded five original songs for the book, along with an audiobook version of the story, voiced by several award-winning voice actors. Both the audiobook and soundtrack are included as a free digital download with each version of the book, and are also available as physical CDs that may be purchased separately or bundled with the hardcover.

A native of St. Joseph, Struwin has been singing and playing guitar since he was in middle school, where he and a group of friends formed a band, and would go on to compete in several competitions that were broadcast over the radio. In high school, Struwin recorded his first album, and released nearly 10 other CDs in the years to follow.

Though he dreamed as teenager of becoming a professional musician, the realities of constantly being on the road as a touring artist caused Struwin to instead focus on a career as an educator, with his interest in music becoming a hobby.

The author said he came up with the idea for “Campfire Stu” — which was his nickname growing up, based off his last name as well as the fact he fact he loved to break out his guitar and start playing when he and his friends would gather around a bonfire — nearly 10 years ago, while studying for his master’s degree in speech pathology at Western Michigan University, he said. Over the next several years, Struwin worked on transforming his idea into reality, launching a Kickstarter campaign last summer that raised $4,500 to help get the book published, he said.

Struwin intends to not only write more adventures starring Stu and his animal friends, but also wants to create more original songs based on the characters as well, he said.

“[The series has] been a nice way to meld my two passions,” Struwin said.

Melissa Phillips, youth services coordinator with the Dowagiac District Library, invited Struwin to read his book in early January, though the snowy weather conditions caused them to postpone the event.

The two had met while Phillips was working for a brief period at Kincheloe Elementary library last year. After the woman began working at the Dowagiac library, she decided to try and schedule something with Struwin, to give families a chance to meet with a published author living right in their backyards, she said.

“We figured it would be perfect to invite Mike out here at the same time as the ice festival, as families will already be out and about that day,” Phillips said.

Saturday will mark the first time that Struwin has read and performed music from the book in Dowagiac, something he is very excited about, he said.

“I’ve already had a couple of kids at school come up to me and say ‘Mr. Mike, we’re going to see you at the library Saturday,’” he said. “I’m looking forward to seeing some familiar faces out there.”

For more information about Struwin and “Campfire Stu,” people may visit campfirestu.net. People who want to know more about the story time or other upcoming events at the library may call (269) 782-3826 or may visit dowagiacdl.org.

NILES — More than 50 people gathered Monday night at the Niles District Library to listen to a presentation that... read more