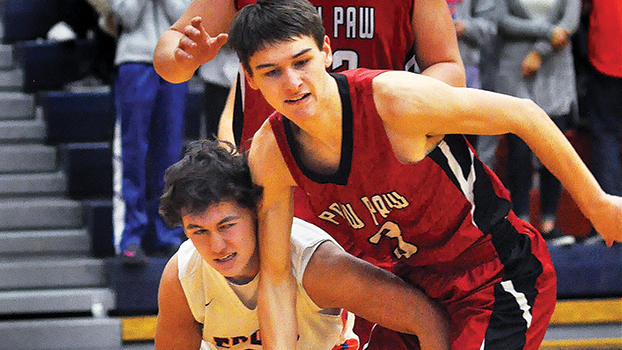 EDWARDSBURG — Host Edwardsburg outscored Paw Paw 26-4 from the free throw line as the Eddies picked up their third win in the last four games, 72-69.

Paw Paw (6-7) had 29 field goals in the Wolverine Conference non-divisional game compared to 19 for the Eddies, who will travel to Dowagiac for a South Division game Friday night.

Edwardsburg outscored Paw Paw 28-19 in the pivotal third quarter to take a 54-51 advantage.

The Eddies hit 11-of-18 free throw opportunities in the four th quarter to hold off Paw Paw.

The Eddies (2-3 South) led 13-12 after one, but took a 24-14 lead into the second half with a strong defensive effort in the second quarter.

“It was a tough, physical game,” Edwardsburg coach Steven Wright said. “Our guys kept their composure down the stretch. It is always tough winning on the road in our conference. I am proud of them.”

Mac Gaideski scored a game-high 20 points to lead the Eddies, who also got 13 points from Harvey and eight points from Sidenbender.