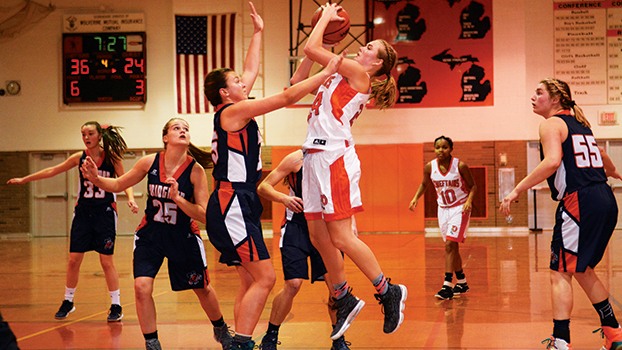 Dowagiac junior Amiyah Smith goes up for two of her game-high 19 points in a 51-38 victory over Bridgman Tuesday, (Leader photo/SCOTT NOVAK)

DOWAGIAC — Some things are inevitable, like death and taxes.

So apparently is the Dowagiac girls basketball team beating Bridgman.

Kazmere Williams pulls up for a 3-pointer in Dowagiac’s 51-38 win over Bridgman. (Leader photo/SCOTT NOVAK)

Dowagiac beat Bridgman again last season and, on Tuesday night, the Chieftains snapped a four-game losing streak with a 51-38 victory over the visiting Bees.

The Chieftains (4-9) got off to a quick start, but had issues maintaining its advantage.

Bridgman (3-12) kept the game close throughout the next three quarters by being patient on offense and aggressive on defense.

Dowagiac led 22-15 at halftime and 36-24 heading into the fourth quarter, but was unable to keep that momentum as the Bees made one last run.

Bridgman got the Chieftains’ lead under 10 points a couple of times late in the final quarter, but were unable to get any closer as Dowagiac spread the floor and ran time off the clock.

“I was very pleased with our offense at the end of the game,” Dowagiac coach Brent Nate said. “The final three and a half minutes we went to our delay game and ran it almost to perfection. We continued to be aggressive out of it when we got a couple of mismatches. We essentially ran three minutes of the clock.”

At the other end of the court, Nate was not as pleased.

“Our end of game defense obviously was where we need it to be,” he said. “We did not rebound at the end. Rebounding has been a weakness for us all year.”

Nate said that the team talked about coming out and playing with energy and enthusiasm. The Chieftains displayed both of those things for the first six minutes before a couple of mistakes tempered their emotions.

“We came out hard,” he said. “I thought we were on the verge of opening it up on a couple of occasions and then a play here and a play there did not happen. And those are plays we can make and we will make them.”

Junior Amiyah Smith had a big game as she scored a game-high 19 points to lead the Chieftains.

Dowagiac also got 10 points from Kellyn Daly and seven points off from Kazmere Williams.

The Chieftains return to Wolverine Conference South Division play Friday night as they host Edwardsburg. The Eddies enter the game 14-1 overall and 7-0 in division games.