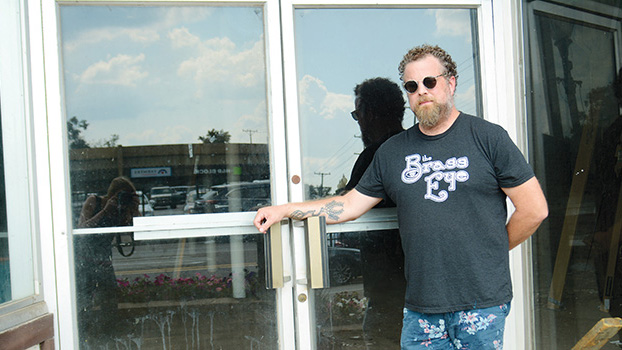 Business owner Bryan Williams poses near the front door at 115 E. Main St. The location is planned to be transformed into a brewery. (Leader file photo)

NILES —  When business owner Bryan Williams, 42, opens the doors to his brew pub, Voyageurs, those looking to escape to a tropical atmosphere will only need to step up to the bar to experience a slice of tropical life far from Michiana.

Williams announced this week that his theme for the soon-to-be brew pub, 115 E. Main St. will be modeled in the style of a tiki lounge.

“It is going to be full out ‘50s, ‘60s style and super gaudy, with lots of bamboo and wicker,” Williams said.

Another element of the brew pub’s design will be a corner dedicated to Niles history. With plans to have people from across the region visiting the brew pub, Williams said he hopes they walk away learning something about Niles.

“I do not want to give away too much, but we are going to try to tie in tiki with local history,” Williams said. “We are going to tie history to fantasy. It could be a good promotion to get people to go up to the history center.”

Ingenuity has often been a pillar in Williams’ business model. For the past three years, Williams  has owned and operated the Brass Eye in downtown, where customers can indulge in creative libations he creates. The call to be spunky and different will be evident in the brew pub.

“I wanted to do something different that no one else in the area has done before,” Williams said.

Inspiration struck Williams about two years ago while visiting The Golden Tiki in Las Vegas.

“I was totally blown away the second I walked in there,” Williams said. “What I loved about it was even through it was in the middle of strip mall, you take your first step in and you are in another land.”

Through his own signature tiki lounge design, Williams said he hopes to whisk customers away to a place where customers can enjoy craft beer and time with friends and family.

“When you walk in, you need to forget the city you were just in,” Williams said. “You are in tiki world. Especially around here [in the winter] when it is cold and gray outside.”

To help fully capture the tiki theme in just the right way, Williams said he is hiring a professional designer to create the right look inside the pub. For the Niles features of the design, Williams said he intends to work with the history center representatives to incorporate historical elements that helped Niles to earn its namesake as the City of Four Flags.

Also building on the theme, Williams hopes to offer customers barrel aged rum beer. A rotating selection of craft beers will also be available. A partnership with the Iron Shoe Distilling, which is set to open this summer, could also be in the works and feature some items from the distillery. Food will also round out the experience.

Williams first announced his plans to create Niles’ first brew pub last fall. The 8,400-square-foot building has been used solely for storage for a number of years and will need a host of repairs to make the space business ready.

“Pretty much everything but the walls need to be replaced,” Williams said.

Williams is working on getting the roof repaired at this time. He said cold weather has temporarily halted the repairs and that nothing can be done until the roof is fixed. Williams said he is eager to get things rolling and hopes to open the brew pub within a year of getting the roof fixed.

The Brass Eye will remain open and several employees are already being trained to help run the bar at 205 N. Second St.

As to what he hopes those who patronize the soon-to-be brew pub get, Williams said:

DOWAGIAC — There will be plenty of cool things for families to check out this weekend, as the city’s annual... read more