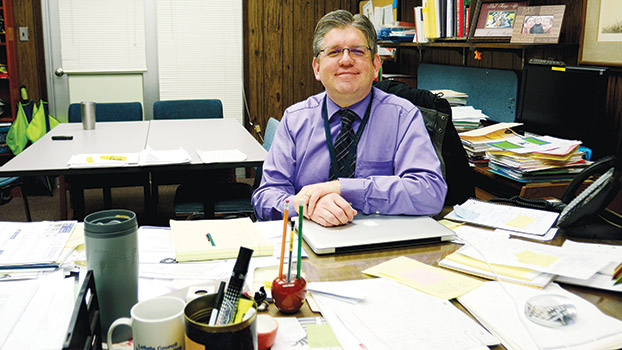 Co-principal David Eichenberg poses for a photo at his desk at Ballard Elementary. (Leader photo/KELSEY HAMMON)

NILES — After Northside Child Development Center principal Zechariah Hoyt accepted a position in January as director of Early Childhood Development with the YMCA of Southwest Michigan, changes in school leadership were set into motion.

Ballard Elementary co-principal David Eichenberg stepped up to express interest taking Hoyt’s place and was selected to fill the role as principal at Northside Child Development Center, 2020 N. Fifth St. Eichenberg will begin transitioning into the school this week and working with Hoyt and staff to learn more about the principal duties.

“The transition will be starting even today,” Eichenberg said. “I will be going over this week and next week during part of the day to learn some about the staff, programming and some of the projects that [Hoyt] has been involved with so that there can be a smooth transition.”

Meanwhile, administration at Ballard Elementary School, 1601 W. Chicago Road, has been searching for an assistant principal to fill Eichenberg’s role. Robin Hadrick, who served as Ballard’s other co-principal, will soon be serving as the sole principal of the school.

“I am leaving the building in good hands,” Eichenberg said.

“I believe in your career, it is good to have opportunities to do something different, because it kind of rejuvenates you in the field,” Eichenberg said.

Eichenberg began his education career in Niles in 1998, when he was selected as assistant principal at Ballard Elementary. In 2003, he began working as the principal at Eastside Connections. In 2010, he returned to Ballard to serve as the co-principal position. Eichenberg said he is excited to apply his experience in the district while serving as a fresh set of eyes as the new principal.

Eichenberg said he first found his passion for education as a student, when his first-grade teacher encouraged him despite his struggles with a speech impediment. The teacher’s kindness encouraged him to become a leader in education, too.

Eichenberg continued his education after high school and earned a bachelor’s degree at Central Michigan University. He then went on to earn a master’s degree in education at Grand Valley State University.

Eichenberg said his perspective now helps him to understand today’s students who struggle in the classroom and he said his mission has always been to help them excel.

“I wanted to be able to come into the school and impart what I learned about resiliency and keeping in the fight through hard days,” Eichenberg said. “[Telling students] ‘You can do it’ and showing them the bigger perspective of where do you want to go with your life after school.”

Eichenberg said his passion for helping students will be carried over to his work at Northside. In the coming weeks as their new principal, Eichenberg said he looks forward to observing and seeing what he can build upon.

“My biggest thing right now is just to get to know the staff, programming the parents and the families and how everything works and operates together,” Eichenberg said.