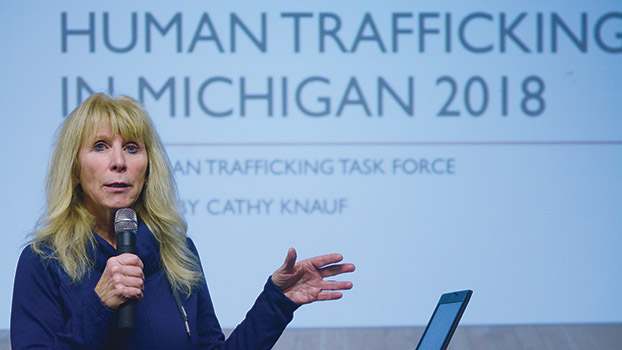 Cathy Knauf, the founder and president of the Southwest Michigan Human Trafficking Task force, talks about how to put an end to human trafficking Monday at the Niles District Library. (Leader photo/KELSEY HAMMON)

NILES — More than 50 people gathered Monday night at the Niles District Library to listen to a presentation that discussed how to put an end to human trafficking by recognizing the signs.

Cathy Knauf, the founder and director of the Southwest Michigan Human Trafficking Task Force, began the informational session by asking those in the audience whether they had knowingly contributed to a form of human trafficking during the course of their Monday. Seeing no one raise their hands, Knauf explained that likely they had if they had consumed a cup coffee, driven a vehicle or used a cellphone. These items represent products produced through human trafficking.

“You are not bad people,” Kanuf said. “You can’t get away from it, but we can become knowledgeable about it and try to change it. We can all become better consumers in how we shop.”

Knauf told the audience that people often think of human trafficking as a problem that plagues only third world countries, but Knauf said human trafficking is the United States’ second largest criminal activity in the nation and likely exists in every city and state.

An example provided was a teen who might go to the mall to hang out with friends. An abuser might approach the victim and compliment them and then offer to give them a ride or buy them some food. If the teen is vulnerable and has run from home or is flattered by the attention, they could accept the seemingly innocent offer. The human trafficker might then work to establish themselves as the victim’s friend or lover, or offer them a place to crash. In return, they might demand that the victim sell themselves for sex to help repay the abuser. Such acts can quickly spiral, leaving the victim trapped in the cycle of human trafficking.

In regards to labor, Knauf said human trafficking might involve an immigrant who has just moved to the county for the promise of a better life. The person might be offered a job by a company or person who will then turn around and exploit them by taking away their identity and rights as individual.

Homeless people are also frequent victims of human trafficking because they are vulnerable and might need a place to stay or want the promise of a job so that they can afford to eat. Those trafficked get caught working grueling shifts at a restaurant, nail salon, supply chain, or as a nanny or forced to pan handle. Despite working, they might be denied pay and access to health and dental care.

Another characteristic is not being able to come and go as they please. Labor trafficking can often be more difficult to spot, Knauf said, because victims often work behind the scenes and are moved around from place to place to make tracking them more difficult.

“There is not a typical type of victim,” Knauf said. “This is anyone in a vulnerable place. The person who has just lost a family member or loved one, their job. Anything that can change your life in a heartbeat.”

Knauf told the audience about several signs to be observant of in their work place and in their daily lives that could indicate a person is a human trafficking victim.

Despite blazing summer heat or bone chilling cold, victims of human trafficking might be either overdressed or under dressed. Victims might overdress as a tactic to hide bruises left by abuse, drug tracks or branding tattoos. Many victims are also branded with a tattoo that might read: “Daddy” or even look like a bar code or a long lengthy decree, marking the person as property.

Victims often will not speak for themselves if questioned. They might also have missing hair or other signs of abuse, no identification card and no knowledge of where they are or what their address is, Knauf said.

She also advised people to watch the billboards along the highways. Illicit massage parlors, where victims might be captive, will frequently advertise truck parking or extremely late hours.

Knauf cautioned residents to not approach those they think are victims, because it could put them in danger, because their abuser is likely watching. She asked those who might notice a red flag to immediately notify the National Human Trafficking hotline at 1-888-373-7888 and local police. If they believe someone is in immediate danger, she said witnesses should contact local police right away.

Caryn Adler, the Niles District Library adult services team member, said she saw a need to bring Knauf to the library to speak on the topic. She said she herself did not feel aware enough about the topic and that she hoped to help the community have access to the information. She asked those in the audience to think about using the knowledge they learned Monday at their jobs and while shopping or going about their daily lives.

DOWAGIAC — The bold, intricate works of art that will soon be on display inside the Dowagiac Area History Museum... read more