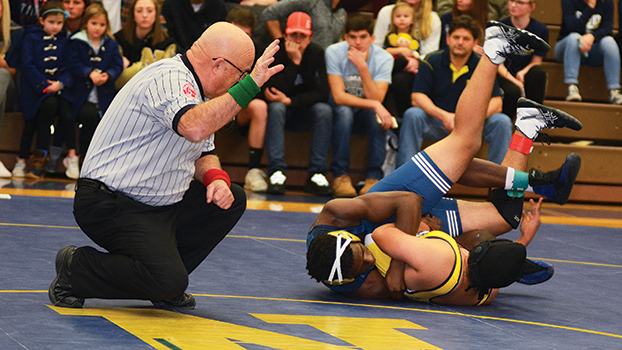 NILES — The first shot in the war between the ranked Niles and Lakeshore wrestling teams was fired by the Vikings at the Greater Berrien County Invitational Saturday.

Niles, ranked No. 10 in Division 2, captured the tournament championship for the fourth time in five years with 276.5 points.

The No. 7-ranked Lancers, who have won 27 county titles, finished with 232 points.

The two teams square off for the SMAC West Division championship in Stevensville Wednesday night.

Niles would like to secure another division championship, but according to Vikings’ coach Todd Hesson there are more important things awaiting both teams.

“Wednesday’s dual is a preliminary,” he said. “We understand that it is for the SMAC West, but looking toward the postseason, we, just like Lakeshore, are battling some illness and a few minor injuries. We will probably mix up the lineup to see a few different matchups for team districts.”

Niles and Lakeshore will do battle again in Richland at Gull Lake High School.

After the Vikings and Lancers do battle with the rest of the SMAC, they will turn their attention to the opening round of the Michigan High School Athletic Association team wrestling tournament, which will be in Stevensville on Feb. 7.

The Vikings face a tough Edwardsburg squad in the opening round at 6 p.m., while Lakeshore takes on arch rival St. Joseph.

The championship match will be 10 minutes after the completion of the last semifinal.

On Saturday in St. Joseph, Niles faced Lakeshore twice in the championship round and just once in the consolation finals (third place matches).

Lakeshore won all three matchups, but the Vikings placed 17 out of the 18 wrestlers that competed in the tournament.

“We have more depth than the Lancers,” Hesson said when asked what he learned about Lakeshore on Saturday. “We closed the gap on the strength of their lineup and scored bonus points on some of their less experienced wrestlers.”

Hesson was pleased with the overall effort his team gave throughout the day in St. Joseph.

“I was surprised by how well our younger kids performed,” He said. “They did a good job. Their conditioning is solid and technique is coming along.”

Wrestling is scheduled to begin at 6:30 p.m. Wednesday.

CASSOPOLIS — It looks like the weather is going to cooperate with the Cassopolis Main Street Committee’s Stone Lake Fishing... read more