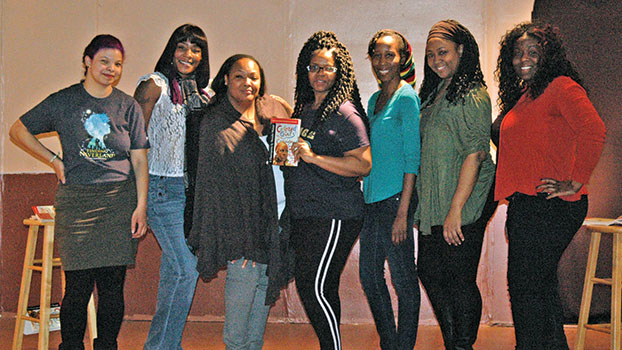 The cast poses for a photo during one of their final rehearsals. (Leader photo/SARAH CULTON)

BUCHANAN — Walking into the Tin Shop Theatre Friday night, one could see a group of women lounging on the stage discussing one woman’s graduation night in eager detail.

Eventually, a woman in the center of the stage starts dancing as she describes the way a boy looked at her that night, while a few women to the right of the stage fan themselves in anticipation for the rest of the story.

The group is acting out a scene as part of a final rehearsal from the choreopoem production of “For Colored Girls Who Have Considered Suicide/When the Rainbow is Enuf,” which will be opening at the Buchanan Tin Shop Theatre Thursday. The Tin Shop partnered with the Box Factory for the Arts in St. Joseph to put on the play for Black History Month.

“For Colored Girls Who Have Considered Suicide/When the Rainbow is Enuf,” written by Ntozake Shange, originally premiered in 1976. The stage play consists of a series of poetic monologues, accompanied by dance and music, which depict the lives and struggles of African-American women.

“There aren’t scenes. There isn’t even necessarily a plot,” said Director August Garritano, of Niles, about the show. “But it is all these poems that work together to tell the greater story about people being oppressed and overcoming obstacles.”

Though the format of may be unfamiliar to some, Garritano said he would encourage the people in the community of southwest Michigan to give the show a chance, calling it “necessary and important.”

“The community needs more diverse theater. With the climate of the #MeToo movement with people coming out and telling their stories, regardless of what people think about that, it’s important that people are telling their stories,” he said. “This show is about women, particularly women of color, coming out and telling stories that they can relate to, that the audience can relate to. It is powerful. … It is hopeful. It is revolutionary.”

“For Colored Girls…” was written by an African-American woman for African-American women. However, this does not mean that other populations cannot connect with the material, Garritano said. As a Caucasian man, he said that he found the written play so moving that he knew he had to bring the play to his community, which led to him pitching the play to both the Box Factory Theatre for the Arts and later the Tin Shop Theatre.

“At the beginning, I kind of struggled with, ‘am I the right person do this? Am I the right person to tell this story?’ But so many of my friends and mentors kept saying that somebody has to tell this story. Somebody has to get it off its feet for people to see,” Garritano said. “I got over it, and realized that it’s not about me. It’s not my story to tell; the actresses are really leading the way. But even if you aren’t a woman of color, which I am not, I can still relate, as anyone in the audience can relate.”

The cast of the play agree with Garritano’s statements that the play is both important and able to be appreciated by all.

Lashonda Campbell, 43, an African-American woman of Benton Harbor, plays the character of the Lady in Brown. She said that she was grateful for the opportunity to participate in the play because she is able to relate to the poems.

“These are women I see daily. I am them, and they are me,” Campbell said. “I think this play will play a big role in people’s lives because it is about women being able to release what we have been holding in for so long: the guilt, the pain, the un-forgiveness. I think it’s awesome. … It’s empowerment, not just for you if you if you come out and see the play. It can inspire someone else, because you can go back and share what you saw, about how women came out of their box.”

For tickets or more information, call the Tin Shop Theatre at (269) 695-6464. The play is not recommended for children.

NILES — The first shot in the war between the ranked Niles and Lakeshore wrestling teams was fired by the... read more