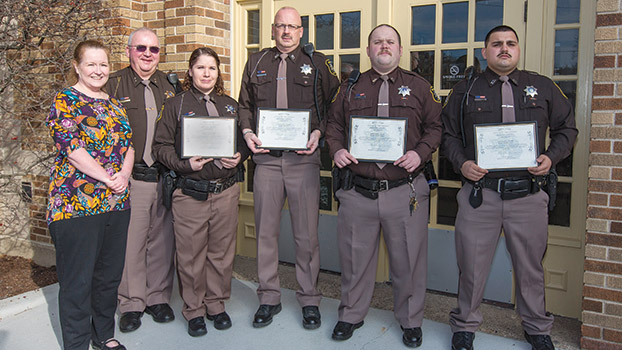 The Berrien County Sheriff’s Office recognized a number of citizens and officers for efforts that saved lives in 2017 at a ceremony in St. Joseph last week. (Submitted photo)

BERRIEN COUNTY — On Jan. 25,  Sheriff L. Paul Bailey honored and recognized eight of his deputies, one nurse, and two citizens for their life saving efforts in 2017.

Bailey said he was honored to have a dedicated staff of employees who are willing to put their lives in harm’s way and provide first aid to the residents and visitors of Berrien County whenever their services are needed.

Bailey also said he wants to thank the citizens who assisted in the life saving actions in 2017.

The individuals honored are as follows.

• Deputy Paul Grenon (Lifesaving Award): On March 26, 2017, Grenon was dispatched to a Priority 1 medical call in Watervliet Township. When Grenon arrived on scene, he found a citizen lying on the ground and unresponsive, while two civilians were performing CPR on the individual.

Grenon hooked up the AED to the individual and it advised to deliver a shock. After the shock was administered, the individual regained a pulse and was breathing.

This citizen was transported to Lakeland Hospital for further treatment. The citizen has since made a full recovery.

• Citizens Amber Langston and Tiffiny Birner (Citizen Lifesaving Awards): Langston and Birner were the two civilians performing CPR on an individual in Watervliet Township on March 26, 2017, when first responders arrived on the scene.

Based upon the actions of Langston and Birner, along with the first responders, the individual survived and has since made a full recovery.

• Lt. Mark McKie and Deputy Chad Frantz (Lifesaving Awards): On April 1, 2017, McKie and Frantz, along with several members of the Niles City Fire Department and the Niles City Police Department, were dispatched to the Quality Inn & Suites in Niles for a priority call of numerous children passed out around the swimming pool area.

McKie and Frantz, along with other first responders, went door to door, floor by floor evacuating all the occupants of the hotel,

McKie and Frantz also assisted the other first responders in removing several juveniles, who were breathing but unresponsive from the pool area of the establishment.

Due to the actions of McKie and Frantz, as well as the actions of all the First Responders, there was only one fatality and all the other juveniles survived.

An investigation into the incident revealed that the juveniles passed out due to the intake of high levels of carbon monoxide.

• Deputy Nicholas Magro, Deputy David Lee, Deputy Nicholas Garza, Deputy Amanda Tober, and Nurse Tamara Scheppelman (Lifesaving Awards): On Aug. 25, 2017, a call was put out over the jail radio of a medical issue in Dorm 2R. Lee, Garza, Tober and Magro along with nurse Scheppelman responded and found an inmate lying on his back. They observed the inmate to have a blue coloration on his lips, hands, and arms.

Nurse Scheppelman instructed the deputies to begin CPR on the inmate. Lee, Garza, Tober, and Magro alternated in providing chest compressions and rescue breaths to the inmate until Medic 1 personnel arrived and took over the life saving efforts.

Scheppelman assisted in monitoring the inmate’s oxygen levels and directed the lifesaving efforts conducted by the deputies.

The inmate was transported to Lakeland Hospital where he received further medical treatment and has since recovered.

• William Ashley (Lifesaving Award): On Sept. 28, 2017, Ashley responded to a call of a medical emergency in Bertrand Township.

When he arrived on scene, he found an individual with no pulse or breathing. Ashley performed CPR and utilized the A.E.D. to shock the individual.

Due to Ashley’s utilization of the A.E.D. and CPR, the individual survived this cardiac arrest.

According to SMCAS personnel, the quick response and actions of Deputy Ashely were instrumental in saving the life of this citizen.

DOWAGIAC — The Beckwith Theatre will present “Yet Another Night of Improv: It’s Complicated,” featuring the Beckwith Improv Troupe, on... read more