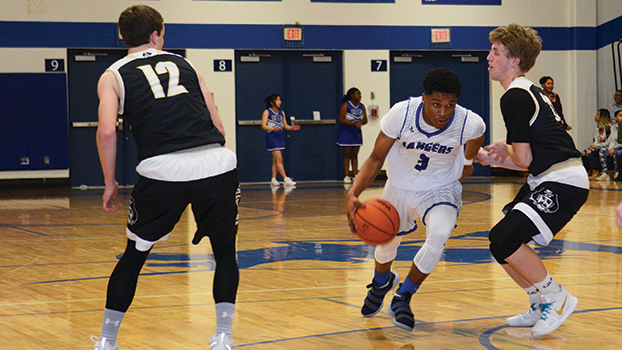 Tyrese Hunt-Thompson drives to the basket for two of his 20 points against Decatur Friday night. (Leader photo/SCOTT NOVAK)

CASSOPOLIS — The final score may read 61-51, but the reality of the Southwest 10 Conference boys game between Decatur and host Cassopolis was anything but close.

The Rangers remained undefeated with the 10-point victory and will put its 9-0 record on the line Tuesday night when it hits the road to face White Pigeon.

Cassopolis dominated the game in stretches, but would follow that up with moments of lackadaisical play.

Veteran Cassopolis coach Ricky Evans was anything but pleased with the performance of his team Friday night.

“Sometimes we just play lazy,” Evans said. “We are undefeated, so it is in their heads now. You still have to come out and play. I do not care who we are facing. I do not think we did that tonight.”

The Rangers got things going early, grabbing an 18-6 first quarter lead, which it increased to 33-19 by halftime.

Cassopolis took a 51-31 advantage into the final eight minutes and that is when things got a bit interesting.

The Raiders outscored the Rangers 20-10 in the fourth quarter to make the final look more respectable.

But at no time was Cassopolis in any danger of losing the lead or the game.

Evans said he needs to find a way to get his team to give 100-percent maximum effort for a full 32 minutes.

“Again, they are kids,” he said. “They are going to try and do things that we do not do. I have to correct that.”

Tyrese Hunt-Thompson led all scorers with 20 points for the Rangers, who also got 10 points from both Walter Lee and Brandon Anderson.

The Raiders were led by Erik Mroczek’s 11 points. Matty Stambek finished with 10 points.

It was the second meeting between the Raiders and the Rangers Friday night.

Cassopolis scored only four points in the entire first half of the meeting back in December.

The Rangers fared much better in the second meeting, but still wound up on the short end of a 37-32 setback.

Decatur led 7-6 after one, but Cassopolis rallied to take a 14-12 advantage to the locker room at halftime.

The Raiders reclaimed the lead after three quarters, 25-20, and then held on for the victory.

Santaja Gibson scored a game-high 23 points for Cassopolis, which also got four points from Sophie Fiala and Jamiee Johnson.