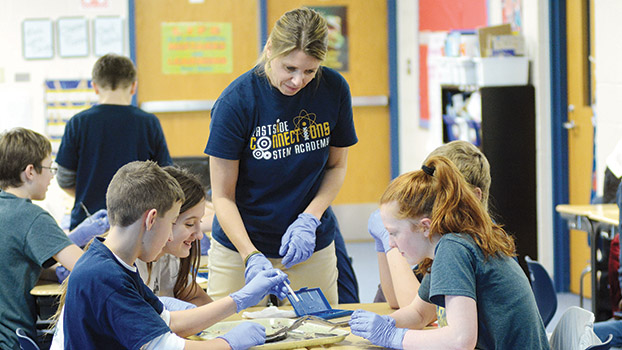 Program offers students a chance to engage in hands on activities

This article has been corrected. The names of the quotes were attributed incorrectly.

NILES — Leaning over their recently dissected sea lampreys, Eastside Connections students got a real inside look Friday at the science behind the worm-like, jawless fish that inhabits the waters of the Great Lakes and oceans.

The event kicked off several weeks of science, technology, engineering and math activities that will take place through April for third to eighth grade students.

Through partnership with area colleges and educational organizations, students enrolled in the program will embark on several adventures this year, including a trip to visit the coast guard, the Kalamazoo Air Zoo and Southwestern Michigan College. Students in the sixth to eighth grades will also have the opportunity to visit the University of Notre Dame to conduct a DNA lab and learn about their ancestors.

Each activity is designed to be hands on and get youth excited about STEM related topics. During Friday’s dissection, Amy Huser, the sustainability and outdoor education coordinator from Camp Friedenswald, taught students the proper dissection method of the specimens, as well as the larger role that the play in the ecosystems they inhabit.

“In some ecosystems, they are endangered. In some, they are invasive,” Huser said.

Science teacher Tammy Mitchell teaches students in the sixth through eighth grade. Since the STEM programs inception at the school four years ago, it has been a big hit with the students, she said. Space for the program is limited to about 120 students from the third to eighth grade and fills up fast. The program costs $30, which mostly is goes to support transit fees.

“Already today there has been a buzz around the school about the program,” Mitchell said.

During the dissection, Mitchell said she hoped students learned to overcome any fears of being squeamish during a dissection and become intrigued by the science behind the exercise.

“I hope they get new respect for how all body systems are similar yet different,” Mitchell said.

Students’ excitement in the experiment was palpable as they diced and inspected the inner workings of the fish.

Seventh grader Arley Wagley proudly held up some cartilage she had extracted from the lamprey and showed it to Huser.

“I like that we get to do all these new activities every time we come,” Werley said of the program.

“And being able to cut open a fish,” said Brandon Kosten enthusiastically.

Huser said it has been heartening to see so many girls, who make up about half of this year’s program, taking an interest in STEM.

“It is nice to see some of the girls diving in and tearing apart the lamprey,” Huser said.

Seventh grader Lorraine Holtgren said the STEM program is something she has looked forward to every year since she first started participating when she was in the third grade.

Like Wagley, she said she enjoys that each year offers a chance at trying new activities. In particular, she said dissection is one of her favorite activities through the program.

Stuart Lundberg said he was grateful that Eastside offers programs like this to students.

“I’m like a surgeon,” Lundberg said of the dissection process.

Eastside Connections is temporarily being housed out of Oak Manor during construction upgrades at the ESC building. The school aims to engage students in hands on project-based learning.

NILES — Exercise does not have to be a daily grind of pumping iron at the gym or running monotonous... read more