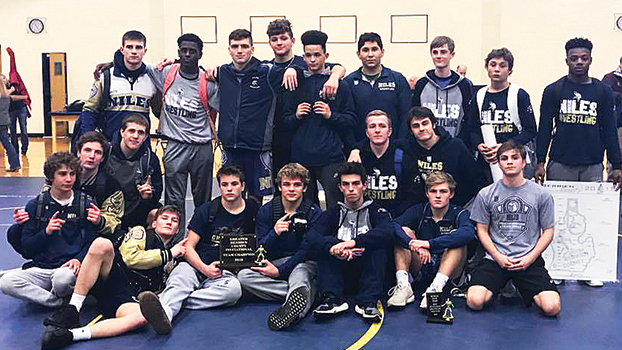 The Vikings, who had their four-year winning streak snapped by arch rival Lakeshore in 2017, reclaimed the title by placing 17 out of 18 wrestlers.

Niles had nine wrestlers reach the finals, which featured three weight classes where it was Viking against Viking.

Niles finished with 276.5 points compared to 232 by runner-up Lakeshore. The two square off for the SMAC West Division championship in Stevensville on Wednesday before competing for a third straight time against each other at the SMAC tournament on Saturday.

Winning championships for the Vikings were Jamison Zimmerman at 103, Austin Franco, who was named the MVP for the weight classes 103 to 145, Javon Ball and Javond Ball at 130.

Reese Gardner and Robert Glover were both third, while Dayton Smith was fourth. Robert Buckland and Kenny Krempetz were both fifth, while Connor Tibbitts, Cole Simpson and Cade Best all finished sixth.

Other area champions were Buchanan’s Adam Eger at 135 pounds, Cassopolis’ Dylan Green at 152 pounds and Edwardsburg’s Nick Bradley at 145 pounds.

Dowagiac’s top finisher was Kody Walker, who was the runner-up at 125 pounds.

Brandywine’s Hunter Heath was the runner-up at 112 pounds.

Complete results can be found in Daily Data.

Photo gallery: The week in pictures

It was a busy week for area boys and girls basketball teams, as well as wrestling teams. Dowagiac and Edwardsburg... read more