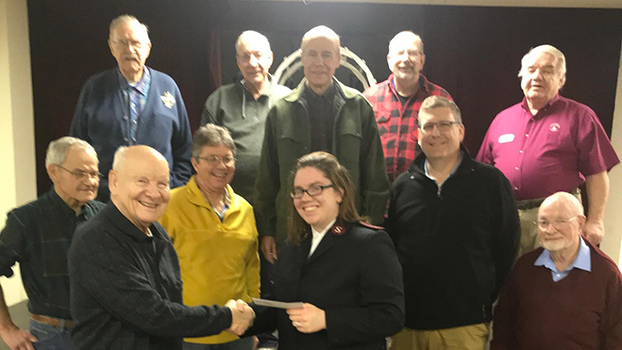 NILES — This past November, the Michiana Metro Lighthouse Chorus hosted its annual Food Bank Fundraiser, A Helping Hand of Harmony, the proceeds of which were pledged to area food banks.

Recently, the chorus presented one of the beneficiaries, the Niles Salvation Army, a check for $2,425.

The total proceeds from the annual fundraiser exceeded $5,000, which was donated to five different food pantries in the area. The other food pantries included Buchanan, Berrien Springs, Benton Harbor and Edwardsburg.

Era Snyder, the chorus president, noted that these contributions were made possible through the tremendous support of area businesses that advertised in the fundraiser program, as well as supporters throughout the county who attended the fundraiser.

The chorus also hosted a food drive the evening of the performance, during which more than 200 pounds of canned goods were collected.

Based in Niles, the Lighthouse Chorus is a men’s a cappella chorus that sings primarily in the barbershop style of music. Using contemporary arrangements, the chorus performs a variety of music, including jazz, rock and patriotic, spirituals and ballads.

They have performed in almost every southwest Michigan and northwest Indiana community, singing on stages, in parks, on sidewalks and in churches.

They seek to give back to their communities by hosting fundraisers for local organizations. The group said it would invited anyone interested in becoming a member to visit a rehearsal at 7 p.m. Thursdays at the Grace United Methodist Church, 501 Grant St., Niles.

NILES — The Niles District Library seeks to build a community of lifelong learners who want to make Niles their... read more