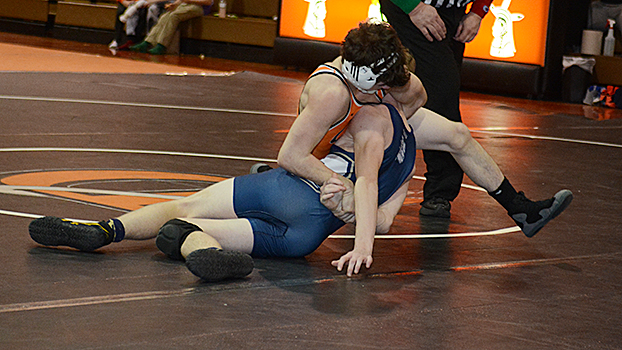 DOWAGIAC — After honoring its five seniors, the Dowagiac wrestling team swept visiting Otsego and Allegan to finish the Wolverine Conference dual meet season with a 7-2 record.

“We didn’t look too bad,” Dowagiac coach Colin Burandt said. “Our lineup is starting to get into place and we are starting to do some things right. I think our seniors wrestled well. It was nice to send them out with a win over Allegan. I think our last win against them was in 2000.”

The Chieftains’ last victory over the Tigers was in the Division 3 regional championship match in 2000. Dowagiac edged the Tigers 29-28 to advance to the state finals.

Dowagiac will compete in the Greater Berrien County Invitational at St. Joseph High School on Saturday before wrestling in the conference tournament at Edwardsburg Feb. 3.

Lyle, Walker and Collett were all 2-0 on the night.

Williams and First were both defeated in their lone match of the night against the Bulldogs.

Besides Lyle and Walker, winning two matches on the night for the Chieftains were Jessie Edge (125) and Lamberto Paredes (152/160).

Winning his only match of the night were Nick Turnbow (152).

Dowagiac showed a lot of patience, especially against Otsego. More than once, wrestlers came back from an early deficit to pick up a victory.

“That is one thing we have been working on, and that showed this weekend when we won three straight overtime matches against Lakeshore,” Burandt said. “It carried over to tonight. To win big matches and big duals as a team, you have to be patient and score the points when you can.”