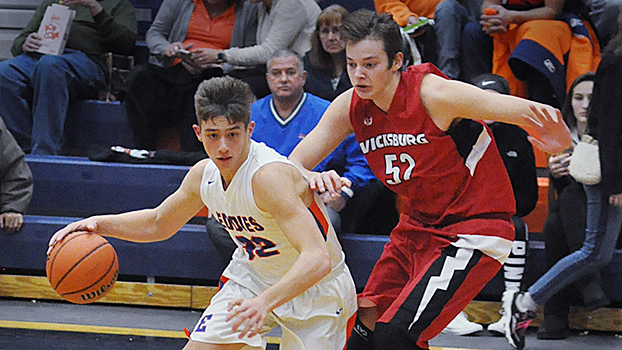 The Eddies knocked off visiting Vicksburg 49-45 in a Wolverine Conference South Division contest.

“It was great to get a win,” Edwardsburg coach Stephen Wright said. “We have been so close the past five games. It just seemed like every game we found a way to not win, whether it’s a missed free throw, rebound, etc.”

The Eddies had previously lost by one to both South Bend Clay and Wolverine Conference foe South Haven before falling to Lakeshore in overtime.

“We are very young on the varsity this year, and each are learning how to fulfill their roles.

Wright is hopeful that his team can build off the victory as it begins the final month and a half of the regular season.

“I think moving forward that the win will give the guys some much needed confidence and understanding about what it takes to win at the varsity level,” he said. “We preach the importance of the ‘process’ and getting better each day as basketball players and young men. We hope that this is a stepping stone into an exciting second half of the season.”

The Bulldogs (2-8, 0-3 South) outscored the Eddies 10-6 in the third quarter to take the one-point lead into the final eight minutes of action.

Edwardsburg regrouped in the fourth quarter and pulled out the victory.

Mac Gaideski scored a game-high 17 points to lead the Eddies, who also got 11 points from Chase Sager and six points each from Tre Harvey and Colby Sidenbender.

Cassopolis now 8-0 after rout of Bangor