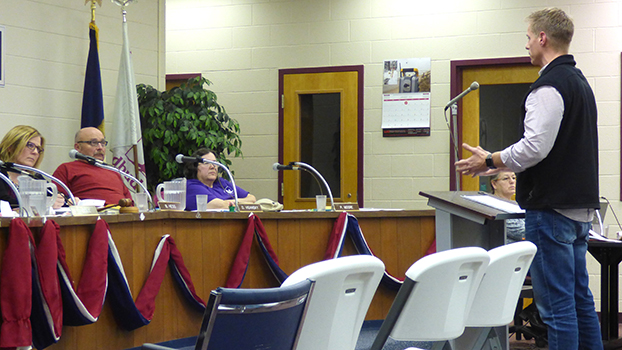 BUCHANAN – The city of Buchanan might have a medical marijuana ordinance in place, but city commissioners learned Monday night that it is still a work in progress when it comes to dealing with businesses applying for permits.

City commissioners delayed a vote approving grow permits for Redbud Roots for three locations on Post Road in the city’s Andrew Farm Industrial Park. The delay came after city staff had some last-minute questions and also realized that the ordinance requires all the application information must be made available to each commissioner before voting.

Commissioners apologized for the delay to Redbud Roots representatives in attendance and said they would host a special meeting to approve the permits in the next week or so if possible. The commission’s next regularly scheduled meeting is three weeks away on Feb. 12.

For their part, Redbud Roots officials outlined its plans for facilities at 215, 208 and 448 Post Road.

Managing Director David Murray said the company is buying the 448 and 215 Post Road sites from C&S Machine which is moving operations to Niles.

Redbud Roots will be renovating those two buildings in coming weeks and months to be medical marijuana grow facilities, Murray said. A third building at 208 Post Road will be torn down and a new 22,000 square foot facility erected.

“We’re looking to expand out slowly. We want to make sure we’re putting out the right product,” he said. “We’re also working with non-profits and others to research the medicinal side, we think it’s at the tipping point. … We want to have a national footprint, but make Buchanan our home.”

He told commissioners that his company was looking at Buchanan for other development opportunities before the medical marijuana opportunity came up. He said the company has brought together experts from California, Colorado and New York as well as local people, like William Haas of Niles, who has been an early medical marijuana proponent.

“We’ve positioned ourselves at the forefront of the medical marijuana industry so we can produce the best product at the cheapest cost,” general counsel Alexander Leonowicz said.

Murray and other company officials praised the city for its effort in doing due diligence in understanding the new medical marijuana laws and establishing the local rules. They also said they plan to support the local community wherever they can. They signed on to be a platinum sponsor of the Winter Thrill on the hill and will now support the Summer Thrill.

Marx said staff members are learning as they go through the first applications and writing up a manual to guide people in the future.

“The process we have established is first come, first serve,” he said.

The city’s embrace of medical marijuana businesses got a vote of confidence from downtown business owner Jeff Griffin. Griffin owns B&W Inn and said he is looking forward to seeing the new development coming downtown.

“I think this will be a great thing and I want to say we support it,” he said.