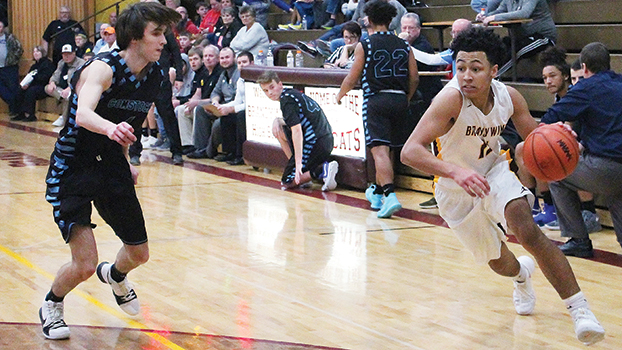 The Bobcat girls team’s nine-game win streak came to an end as the Colts beat Brandywine 52-48, sweeping the season series.

The boys’ three-game losing streak ended with a 57-50 Red Division win over Comstock.

Behind a game-high 14 points from sophomore point guard Shane Brown, the Bobcats came away with a 57-50 win.

Brandywine led by 18-3 in the first quarter with the help of eight of Brown’s points.

“He is really starting to get into the point guard role,” Brandywine coach Nathan Knapp said.  “He has really been working hard these past couple of weeks.”

However, a 12-0 run at the end of the first quarter and the start of the second by the Colts led Knapp to a timeout and some time to calm his team down.

His quick discussion worked out as Brandywine had another double-digit lead behind a 9-0 run.

The Bobcats would go into the halftime break with a 33-23 advantage.

Brandywine forced turnover after turnover, which led to some quality points and held the Colts to just four points in the third quarter.

With a sizeable 26-point lead with just the fourth quarter to go, Knapp had the opportunity to give all of his players some time on the court.

Comstock began to chip away at the lead as they left their starters in, but couldn’t muster a big enough comeback.

Brandywine will host Watervliet Tuesday night in a preview of its Class C district opener March 5 against the Panthers.

Back in December, the Bobcats suffered a 58-36 loss to Comstock. On Friday night, Comstock ran across an improved Brandywine team.

The action went back and forth throughout the opening half, but the Bobcats were able to take a 22-18 lead into the locker room at the intermission.

Brandywine not only led on the scoreboard by four points, but also led in the halftime statistical categories of assists (7-3) and rebounds (15-12).

The Colts opened the second half with an 8-0 run and started to pull away from the Bobcats.

A technical foul on the Brandywine bench led to four consecutive free throws by Comstock’s Daisy Ansel and a 33-25 Colts’ lead.

Brandywine would outscore the Colts 16-14 in the final quarter behind sophomore point guard Zakiyyah Abdullah and junior forward Nicole Sachman, but key Comstock free throws turned away the comeback effort by the Bobcats.

“You don’t like to lose, but if you do its going to be against a good team like that,” Brandywine coach Josh Hood said. “We had a much better game against them this time around. You can tell the girls are improving.”

Sachman finished with 17 points, seven rebounds, a block and an assist. Abdullah had 13 points, six rebounds, three assists, and a pair of blocks.

Comstock’s Ahkyla Bailey had a game-high 21 points, eight rebounds, five assists and four steals. She also scored her 1,000th career point on a free throw in the fourth quarter.