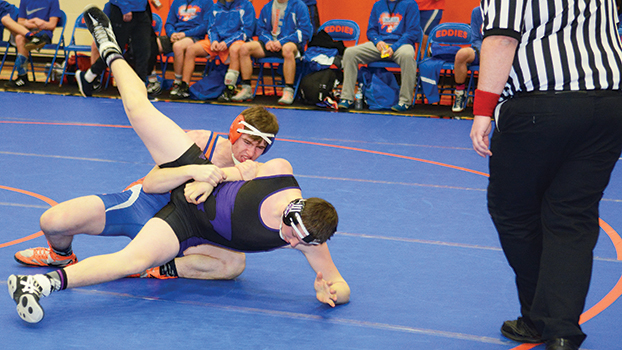 The Chieftains lost to Sturgis 36-28, but rebounded to knock off Three Rivers 50-30.

The Vikings improved to 12-1 and remained undefeated in SMAC West Division matches following its win at Portage Northern.

Niles had little trouble with the Huskies, as it won 12 of the 14 matches, including nine by pins, one by technical fall and two by major decision (eight or more points).

“We had a solid night of wrestling,” Niles coach Todd Hesson said. “Javond Ball and Austin Reid are really starting to put things together on the mat. Our conditioning is coming along. We just need to find the right balance of when the force things and when to take different technique as they come along.”

Niles faces two strong tests over the weekend as it competes in the Lakeshore Super Duals beginning at noon, and then heads to Michigan State University to wrestle Whitehall in East Lansing on Sunday.

The Eddies won the battle of Wolverine Conference unbeatens with ease over Sturgis.

Edwardsburg opened the evening with a dual against Three Rivers.

“I thought last night was a good night for Edwardsburg wrestling,” Edwardsburg coach Jesse Becraft said. “We got to showcase some youth wrestlers before the duals, honored our seniors before our last home duals. I felt we wrestled a little flat against Three Rivers, but then really stepped it up against Sturgis, who was previously undefeated in the conference. All in all, it was a very good night for us.”

Dowagiac is now 18-6 overall and 5-2 in conference duals.

CASSOPOLIS — Two teams that are trying to figure out what it takes to win on a consistent basis squared... read more