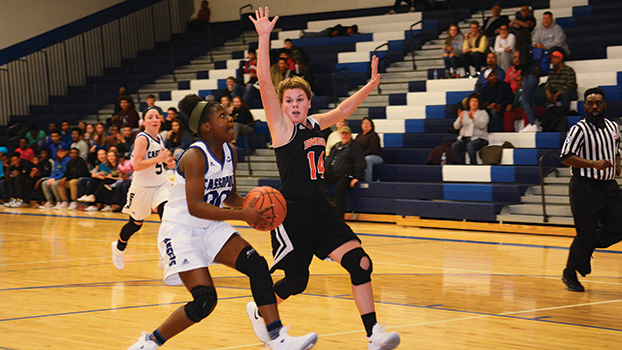 CASSOPOLIS — Two teams that are trying to figure out what it takes to win on a consistent basis squared off Wednesday night in a non-conference battle.

Visiting Dowagiac came into the game off a win over Vicksburg last Friday night.

The host Rangers were coming off a lopsided loss to Centreville from the previous evening.

The Rangers raced out to a 22-8 halftime lead and then held off a furious Chieftain comeback in the second half to win 44-42.

The win was only the second of the season for Cassopolis and coach Janice Gatson said her team has a lot to learn.

“We do not know how to play with a lead,” she said. “Tonight was the opposite of how we have been playing. We have been playing terrible the first two quarters and then playing well in the second half. We flip-flopped today. There were a lot of positives from tonight. We are doing a lot of things right. We are getting the ball up the court and running our offense.”

Gatson said her team still needs to cut down on the mistakes.

“Turnovers are hurting us,” she said. “We also need to work on our shot selection.”

Cassopolis led 12-3 after one quarter as it scored the first 12 points of the game before Dowagiac’s Tania Parker-Wilson connected on a 3-pointer in the closing minutes.

Things did not get much better for Dowagiac in the second quarter as it scored just five points, while the Rangers added 10 more to increase its lead to 14 at the intermission.

Dowagiac coach Brent Nate was displeased with the effort his team gave.

“We were pathetic,” he said. “That is embarrassing.”

The Chieftains took the entire 10-minute intermission to talk about the first half and what it needed to do over the final 16 minutes to get back into the game.

“Act like you want to be here and play basketball,” Nate answered when asked what the message was in the locker room.

Dowagiac came out and an outscored the Rangers 24-22 in the second half, but could not come up with the go-ahead basket.

The Chieftains (3-6) whittled the Cassopolis lead down to 31-25 after three quarters and got two within a single point when Taylor Pye scored her lone basket of the night with 11.4 seconds remaining.

Angel Gary hit one of two free throws for the Rangers with 5.9 seconds remaining to make it a two-point advantage for Cassopolis, which hit just 6-of-18 free throw attempts.

Dowagiac got the ball in-bounds, but the Rangers’ pressure defense forced a turnover as time expired.

Santaja Gibson led the Rangers and all scorers with 26 points. Cassopolis also got seven points from Gary.

The Chieftains, who host Three Rivers at 5:45 tonight, were led by Kellyn Daly’s 12 points. Amiyah Smith finished with 11.

D.J. Lanier is a sophomore on the Dowagiac basketball team. What has been one of your greatest accomplishments as an... read more