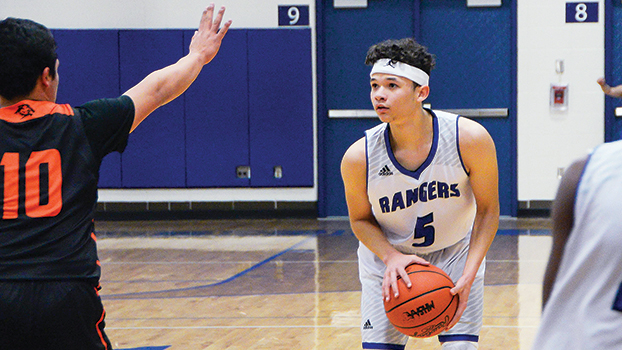 Xander Smith scored 11 points against Centreville as the Rangers improved to 7-0 on the year. (Leader photo/ERIKA PICKLES)

Rangers improve to 7-0 with win over Centreville

The win improved the Rangers to 7-0 overall and 5-0 on conference games.

With the two teams deadlocked at 15-15 after one quarter, Cassopolis exploded for 25 points to take a 40-24 advantage into the locker room at halftime.

The Rangers were never challenged from there.

“We played great defense for 32 minutes and that is all I can ask for,” Cassopolis coach Ricky Evans said. “The kids are looking for each other on offense. We are playing team ball. We still have to clean up some things on both ends of the court, but overall, I am pleased the direction we are going the kids are playing well.”

The Rangers also got 12 points from Tyrese Hunt-Thompson and 11 points each from Xander Smith and Darrion Gatson.

Walter Lee and Brandon Anderson both finished with eight points.

The Rangers (6-0) had their Friday night Southwest 10 Conference game with Mendon postponed due to weather.

Cassopolis jumped out to a 24-14 first quarter lead and maintained its 10-point advantage at halftime, 36-26.

The Rangers poured in 32 third-quarter points and took a 58-47 lead into the final eight minutes of play.

Cassopolis outscored the Bees 13-4 in the fourth quarter to earn the easy victory.

“We are starting to understand the importance of playing go defense and playing hard for 32 minutes,” Cassopolis coach Ricky Evans said. “We have just go to make some free throws.”

Nick Boyd scored a game-high 22 points to lead Bridgman, which drops to 4-6 on the year.

The Rangers will travel to White Pigeon for a Southwest 10 Conference contest at 7:30 p.m. Jan. 30.

Defense continues to be a problem for the Cassopolis girls basketball team, which dropped a 62-31 Southwest 10 decision to visiting Centreville Tuesday night.

The Rangers (1-4) have allowed opponents to score 50 or more points in three of their five games.

Centreville led 52-23 heading into the final eight minutes of play.

Joanna Larsen led the Bulldogs with a game-high 19 points and 11 rebounds.