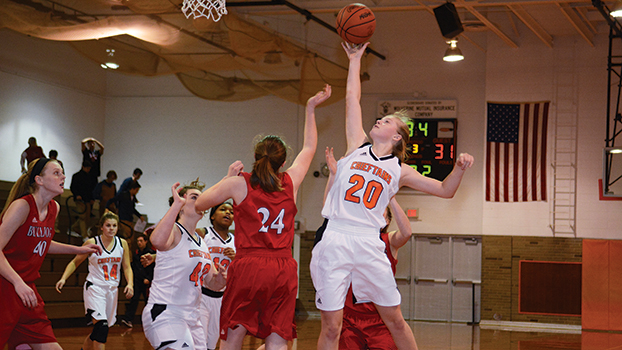 DOWAGIAC — It was night and day for the Dowagiac boys and girls basketball team in its Wolverine Conference South Division doubleheader Friday night.

The Chieftain girls team had to rally to defeat the visiting Bulldogs 46-39 to earn its third victory of the season and its second in conference play.

Meanwhile, the Dowagiac boys team nearly let a 15-point fourth quarter advantage slip away before pulling out a 50-47 victory over Vicksburg.

The win kept the Chieftains atop the South Division standings with a perfect 3-0 record.

The Chieftains again came out flat in the third quarter and trailed 33-30 heading into the final eight minutes of action.

Dowagiac came back once again, this time by outscoring the Bulldogs 16-6 in the fourth quarter to pick up the win.

“Nice to get that second conference win,” Dowagiac coach Brent Nate said. “We played a lot better and we played unselfish tonight. Everyone contributed. Obviously Amiyah (Smith) paced us in the first half.”

Smith scored 16 of her game-high 18 points in the opening 16 minutes.

Dowagiac also got big contributions in the seocnd half from Tamia Parker-Wilson and Madison Potter off the bench.

“Tamia had some big buckets in the fourth quarter and Madison came off the bench and scored four points that got our legs back under us after we came out flat to start the second half.”

Illness has been an issue the Chieftains have been dealing with since Christmas break and it nearly caught up with Dowagiac Friday night.

The short-handed Chieftains ran out of gas in the fourth quarter and Vicksburg took advantage of it.

The Bulldogs, however, were unable to overcome an early deficit in the division loss to Dowagiac.

The Chieftains played without starter Jamin Hunt, who was both ill and nursing a sore foot.

“We were a little short-handed tonight and we could have used him, especially when we got into foul trouble,” Dowagiac coach Danum Hunt said. “We could have used his size and ball handling and given D.J. (Lanier) some relief. He got a little winded there.”

Dowagiac was able to stretch its lead to 33-24 heading into the fourth quarter and the advantage reached 15 points before the Bulldogs turned up the pressure and forced the Chieftains into numerous turnovers and some bad shots.

But in the end, Dowagiac was able to hold it together and remain unbeaten in conference games.

“We pulled off the W,” Hunt said. “It was an ugly one, but we will even take the ugly ones. Tonight we struggled with inconsistency. The game was up and down for us.”

Hunt said the Chieftains will need to work on that.

“We started out pretty slow and we got even slower with just seven points,” he said. “Defensively we were OK because we held them 17 points. But we did not do much offensively. Tonight on offense we missed the mark.”

Lanier led the Chieftains with 12 points, while Shaquan Stanback added 11 and Caleb Murphy 10.

For the Bulldogs, C.J. Laske scored a game-high 19 points.

Dowagiac steps out of conference play Tuesday night with a trip to Niles to take on the 3-4 Vikings.

NILES — For the second game in a row, the Lady cats struggled from deep and, yet again, still found... read more