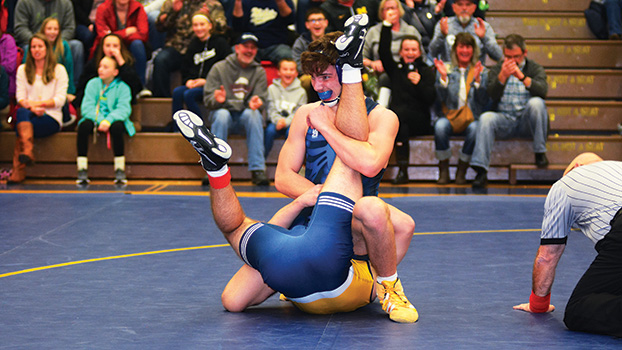 The Vikings had no troube remaining undefeated as they routed the Bears 72-6 to improve to 8-0 overall and 2-0 in the West Division.

While it was nice to get all the seniors in the lineup, veteran Niles coach Todd Hesson knows that the state tournament is a month away from starting and the Vikings’ schedule is about to get a lot tougher beginning on Saturday.

“We got all the seniors in the lineup and we had a little fun with it,” Hesson said. “You want them to enjoy the night. From that standpoint it was a good night.

“This weekend we are getting ready to swim in the deep end of the pool with Gaylor, DeWitt and about four other ranked teams. We did not look like a ranked team out there tonight. Sometimes we wrestle down and other times we are just lacking a bit of mental toughness. This team is new to this. They have done a great job and we are much further along than I thought we would be, but mentally they are not quite there yet.”

Hesson said his team has a couple of weeks to get that figured out.

After the Forest Hills Eastern tournament on Saturday, Niles still has the Lakeshore Super Duals on its schedule and a date for the West Division championship in Stevensille with arch rival Lakeshore..

Hesson has been pleased with his team’s work-ethic all season long and knows they will continue to work hard in preparation for its biggest matches of the year.

NILES — The Brandywine wrestling team improved to 10-3 overall and 2-0 in the BCS Athletic Conference with a sweep... read more