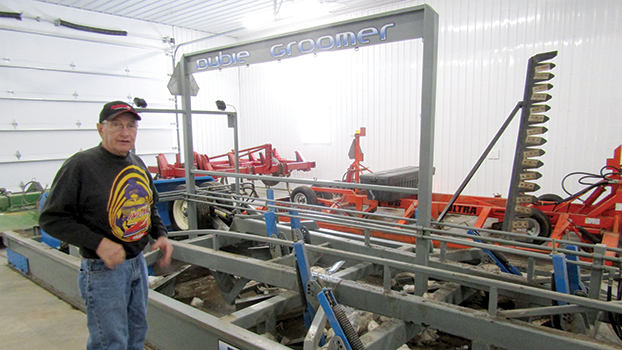 EDWARDSBURG — During winter weekends in Edwardsburg, the more it snows the more people file into the lot next to Red Star Auction on May Street.

No, the snow is not eliciting people to purchase liquidated patio furniture. It is triggering the impulse to ride snowmobiles.

“There will be 60 trailers sitting in that lot, and they’ll completely pack it,” said Norm Krupp, president of the Edwardsburg Snowmobile Club. “Many of those trailers are big enough to carry four [snowmobile] sleds, and that’s just one area where people park.”

The lot is the main staging area for snowmobile riders to access an interconnected trail system that runs through much of southwest Michigan and extends north of South Haven. According to a map produced by the Southern Michigan Snowmobile Council, in total there are more than 370 miles worth of trails.

The system is made up of six different trails, each groomed and maintained by a local club, which is considered its grant sponsor. Some of the clubs are based in the Michiana area, including the Edwardsburg Snowmobile Club, which is responsible for the largest trail, just under 100 miles long.

“By being a grant sponsor, most of the expenses that we encounter are paid by Michigan’s snowmobile program,” Krupp said.

Other clubs in the Michiana area include the Four Flags Snowmobile Club in Niles and the Southwest Michigan SnowStompers in Lawton.

Every snowmobile on the trails must carry a seasonal permit that costs $48. That money is dedicated to the local snowmobile program in southwest Michigan, which is completely self-sufficient. No tax dollars are used to fund it.

Funds from permit sales pay for the signs used to direct riders on the trails, liability insurance, most of the equipment used for grooming and other necessary expenses.

“The only thing it doesn’t pay for is labor,” Krupp said. “There are thousands of hours every year that this club donates, in essence, to the snowmobile program to keep this trail system going.”

Each year, preparation beings in October, before winter snow begins to fall. During this time, club members brush the trail to make it as smooth and free of debris as possible. They will also begin to mark the trails with signs, following state mandated rules.

Their goal is to be prepared by the start of snowmobile season on Dec. 1, but it usually takes them an extra week or so.

“We are limited in how much we can do because of hunting season,” Krupp said. “We can’t do anything in a lot of the areas. Particularly, in November during the firearm deer season.”

After volunteers finish brushing and marking the trail, it is time to wait for snow. The Southern Michigan Snowmobile Council recommends that four inches of snow to fall before trails are operational.

Once that happens, they are groomed by large, converted farm tractors that drag equipment designed to smooth the snow. For the entire season, the weather dictates how much grooming needs to be done.

When snow is plentiful and riders are abundant, the trail may need to be groomed twice over the course of a weekend, and the tractors can spend more than 10 hours smoothing out a 15 to 20-mile section of the trail.

The Edwardsburg Snowmobile Club has two tractors. Krupp estimates that, combined, the two tractors have already groomed more than 1,000 miles this season, which can technically go through March 31. However, Krupp said it is unlikely snow will last that long.

“For this area, if we get to the middle of February, we consider it pretty fortunate,” Krupp said. “January is the key month, and December is a bonus month. You can’t groom when it gets above freezing. Snow doesn’t flow. It just packs into balls.”

Most of the land used is private, so signed permission must be given before a trail goes through someone’s property. The current system required the signatures of more than 150 landowners.

This may seem like an extraordinary amount of work to have recreational snowmobiling in southwest Michigan, but Krupp says the program is “vital” for the area.

“[Snowmobiling] is one of those things that a lot of people don’t realize the economic impact it has,” Krupp said. “When you have thousands of sleds in the area, they’re bringing in a lot of money to restaurants and gas stations.”

However, the people who maintain the trails aren’t doing it for the money. They’re volunteers. Instead, they’re doing it because they are passionate about snowmobiling and providing a service to their community.