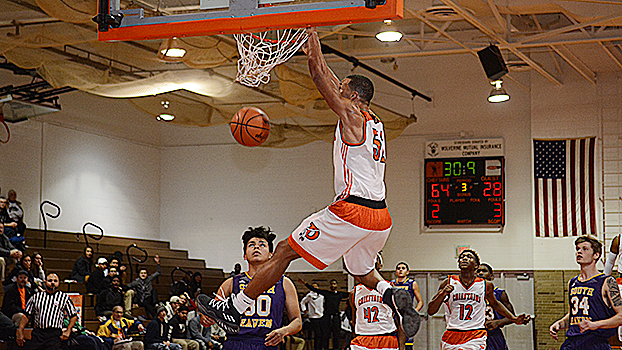 DOWAGIAC — Talk about kicking off the new year in style.

After going 3-3 to open the 2017-18 season, the Dowagiac boys basketball team worked hard over the holiday break to improve its offense, defense and desire.

All three of those facets proved much improved as the Chieftains routed visiting South Haven 71-37 in a Wolverine Conference non-divisional game Tuesday night.

Dowagiac (4-3) turned up the defensive pressure on the Rams, attacked the basket time after time and played with emotion the entire night.

“The guys came out tonight, were focused and ready to play,” Dowagiac coach Danum Hunt said. “They gave a maximum effort for 32 minutes and that is what we have been talking about. We finally got that tonight.”

Senior Caleb Murphy played the best game of his career as he had three dunks, including an alley-oop to end the first half and finished with a game-high 24 points.

The Chieftains were in control from the start, grabbing a 21-9 first-quarter lead.

South Haven (1-6) made one run at Dowagiac, late in the second quarter, but the Chieftains regained control of the game by once again going inside to Murphy, who either scored or kicked the ball back out to teammates who knocked down wide-open outside shots.

“In the first-quarter we kind of when away from what we had worked on,” Hunt said. “It did not seem to work, so we went right back to what we had been doing and there was no looking back. The guys played great, they rebounded great, we ran the floor and we shot the ball well. Tonight was a good night for us. I think we are starting to put it all together.”

Murphy had nine of his 24 points in the second quarter and 16 points total, which included three powerful dunks.

“That is the formula we want to use,” said Hunt, of Dowagiac’s ability to pound the ball into the paint where it can score or kick it out to the wings who were getting good looks at the basket. “He is the most athletic big man that we have in our league and we want to take advantage of that. I was telling him that he can do that night in and night out if he just focuses and takes his time.

“The guys shot really well. We practice inside-out shooting every day and they got into a rhythm and they knocked the shots down. Our penetration and passing was great tonight. We shared the ball and I think overall we had a pretty good game.”

An eight-point third quarter did not help the Rams’ chances of making a comeback as Dowagiac used a smothering full-court defense to force South Haven (1-6) into numerous turnovers, which led to easy baskets.

Besides Murphy’s offensive output, Dowagiac got 17 points from D.J. Lanier and 12 points from Shaquan Stanback.

Caleb Ford and Alex Brantley each scored 10 points for the Rams.

NILES — Brandywine overcame a sloppy start to its first game of 2018 and managed to continue its winning streak... read more