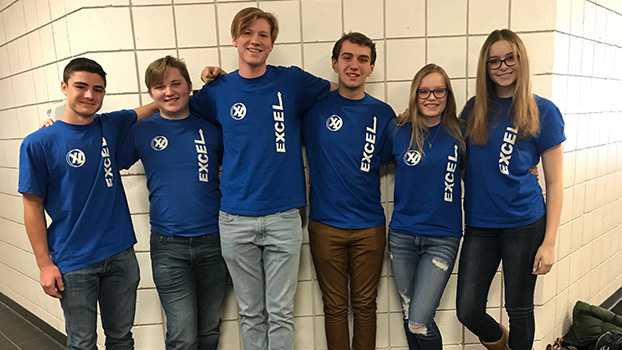 BENTON TOWNSHIP — Saturday morning across the globe, high schoolers were broadcasted a live feed detailing their next mission: build a sophisticated robot with a knack for climbing, lifting and strategizing its way out of the confines of an arcade game.

The challenge was presented at the FIRST (For Inspiration and Recognition of Science and Technology) Robotics competition, which kicked off Saturday at Lake Michigan College’s Mendel Center Grand Upton Hall, drawing 23 high school aged teams from across Michigan and one team from Indiana to compete.  Across the state of Michigan 509 teams will be competing.

This year’s challenge is called “First Power Up” and will involve two alliances of video game characters. Trapped inside an arcade game, the robots must climb, crawl and work their way up a scale for the ultimate battle with a character called “the boss.”

Saturday’s event kick started six weeks of the design, programing and building process of the competition. After building their robots, the teams will square off in district, state and global competitions.

Known for drawing fans of sports arena like proportions, the competition seeks to get youth pumped up about science, technology, engineering and math concepts. Competition senior judge Tim Dunaj said the project’s goal is also to help youth obtain a slew of other skills that extend far beyond the robot play field.

“They start to work in a collaborative environment, where they are involved with brainstorming,” Dunaj said. “They are working side by side with mentors who are professional electricians, engineers and mechanical engineers.”

The competition has also helped to open doors in manufacturing and engineering industries, not just because it could be a line on a resume, but because the competition helps students to connect with experts and gain contacts in the field.

Prior to finding out what this year’s competition would entail, students engaged in a question and answer session with a panel of experts in the engineering and manufacturing industries. The panel included representatives from Phycotech Inc., Kendal Group, Edgewater Automation, Johnson Rauhoff, as well as state Sen. John Proos and Mike Ryan, a spokesperson from U.S. Rep. Fred Upton’s office.

“Students asked questions about what skill sets [the employers] were looking for,” Dunaj said. “Some of the questions had to do with where they started their career.”

LMC President Trevor Kubatzke helped to open the ceremony Saturday, which was followed by a speech from Cassopolis student Amelia Ayers, who talked about how FIRST had positively helped to shape her high school career.

Dunaj said it is not uncommon for students to make connections with experts in the industry that could ultimately turn into internships and eventually a job.

Furthermore, students got to show off their proudest work to these same career leaders in a “classic car show” setup.

“It was a chance for them just to show each other what they were doing and any of the visitors, guests and speakers had the chance to walk around and meet students,” Dunaj said.

Because of the scale of the competition, Dunaj said students also get the chance to feel comfortable portraying their ideas in front of an audience.

“It is really modeled after a business environment,” Dunaj said. “They have to go out and promote themselves.”

In the months of competition ahead, Dunaj said he was looking forward to seeing students grow through the experience.

New economic development board to begin meeting next month

DOWAGIAC — A group of local leaders and professionals will soon get down to business in hopes of creating new... read more