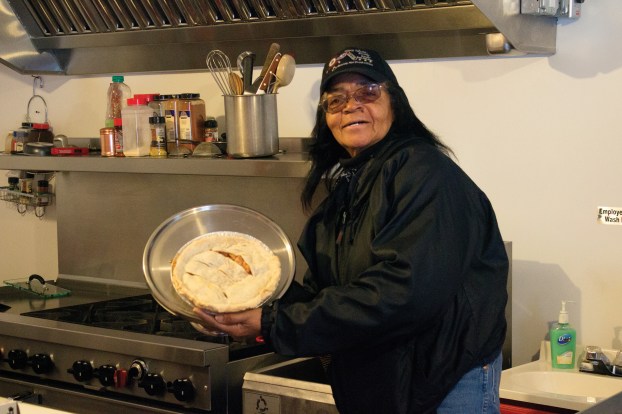 DOWAGIAC — When Dowagiac’s Ester Stanley and the other members of her nonprofit organization, The Stepping Stone, opened the Stone’s Throw Family Kitchen this past fall, they envisioned the small eatery as a place where people from all walks of life could come together to share a meal and some good conversation.

However, without the support of the local community, this vision could be snuffed out before it is fully realized.

Members of The Stepping Stone are currently seeking additional volunteers and donations for the local soup kitchen, located at 200 Thickstun St., Dowagiac. The nonprofit is looking for around seven people who are willing to spend a few hours a week to help cook and serve meals at the establishment, which is currently open six days a week.

“We are looking for volunteers with a lot of passion, and who are confident in their skills,” Stanley said.

At the moment, the kitchen only has a handful of volunteers, some of whom are working 12 hours per day in order to keep the Stone’s Throw afloat, Stanley said.

The Stepping Stone — a Dowagiac-based nonprofit that assists the local community in a number of ways, including its after-school program — opened the Stone’s Throw to the public in October, after working more than a year to get the building — a former diner — up and running again. The organization was assisted by a $5,000 grant from The Pokagon Fund, which helped pay for the new kitchen equipment inside.

Since opening, the kitchen has served locals with not just hot soups and chili, but has whipped up hamburgers, French fries, chicken wings and other diner fare for visitors. Over the last several weeks, a local woman has volunteered her time baking pies and other desserts for the kitchen, which have been popular among visitors.

Stanley and others with the organization opened the kitchen to not only help feed others, but to bridge the gap between different segments of the Dowagiac community. By coming together and sharing a cup of coffee together, Stanley said that locals of different racial and socioeconomic backgrounds can begin to better understand one another.

To do that, however, The Stepping Stone will need the support of others, she said

“We feel we have an obligation to help, but it takes a community effort to pull it off,” Stanley said. “We can start it, but we can’t carry it forward on our own.”

On top of volunteer support, Stanley is hoping that more people will begin frequenting the kitchen to grab a bite to eat, and to leave a donation. While one-off contributions have helped immensely, if 20 or so people come by and leave several dollars in exchange for a warm meal every day, the kitchen will have enough capital to keep the lights on and shelves stocked, Stanley said.

The Stone’s Throw Family Kitchen is open from 10 a.m. to 2 p.m. Monday through Thursday and from 10 a.m. to 10 p.m. Friday and Saturday. For more information or to volunteer, people may call the kitchen at (269) 414-0940 or visit thesteppingstoneback2basics.com.