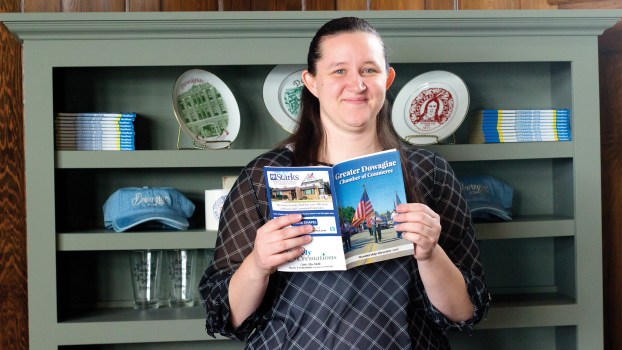 Rachel Hacker, an intern with the Greater Dowagiac Chamber of Commerce, poses inside the organization’s office. The student will be reaching out to local businesses this month in order to recruit companies for the chamber’s new job shadowing program. (Leader photo/TED YOAKUM)

DOWAGIAC —  Thanks to a new partnership between the city’s business and academic worlds, local students will soon have a chance to experience a day in the life of various professions, before they earn their high school diploma.

The Greater Dowagiac Chamber of Commerce and the Southwestern Michigan College Education Talent Search have recently teamed up to launch a new job shadowing program, aimed at local junior and senior high school students. Participants will get a chance to spend one to two hours shadowing a professional in the career field they are interested in pursuing, and will be free to ask questions to the person they are following to learn more about the particular industry.

The chamber is currently recruiting businesses to participate in the program. Owners interested in becoming a job shadowing site may contact the organization at (269) 782-8212.

The chamber’s job shadowing program was devised by board member Mandy Wallace, a staff accountant at Accounting Consultants. Wallace said she proposed the idea when she and other chamber leaders were asked for suggestions on new initiatives by chamber president Kim MacGregor around six months ago.

The Dowagiac native said she knows firsthand the impact that job shadowing can make on a young person’s career aspirations.

When she was in high school, Wallace wanted to become a dental hygienist. She called up the office of her dentist, Matthew Cripe, and asked if she could come in and observe one of the employees there while they worked.

The decision would end up saving Wallace a lot of time — and money — later in life.

“I wasn’t even there for 30 minutes before I said to myself, ‘this is not what I thought it would be,’” Wallace said. “It gave me a greater appreciation for what goes on the other side of the chair, but it also let me know this was not the right career for me.”

Since then, Wallace has observed many young people struggle to find a clear direction for their futures. While working in the enrollment office at Southwestern Michigan College, she would talk to students all the time who changed their mind on what they were studying.

Even at her current job, the accountant said the company has several fresh college graduates come on board, and have difficulty adjusting between what they expected personal accounting to be like while in school compared to the realities of the job.

Shortly after Wallace floated her idea with the rest of the chamber leadership, educators with SMC’s Education Talent Search — a federally-funded program that connects high school students with vocations such as law enforcement or agriculture — approached the organization with a similar idea. With a shared vision in mind, Wallace has worked over the last several weeks with ETS Director Jeran Culina to bring the job shadowing program to life.

“I thought it would be the perfect partnership to put together for students,” Wallace said.

The program differs from a traditional work-study program, such as an internship, in that students only spend a single day at the business. However, such a small-time investment can make a world of difference to students, who can use their real world experience to determine their post-graduate futures.

“It doesn’t cost businesses anything, resource wise, but it’s such an important thing for the community,” Wallace said.

Companies that cannot provide a traditional job shadowing experience can still organize student tours of their business through the program, Wallace said.

With several local businesses already on board, Wallace said she and the ETS program expect to begin matching students with job shadowing opportunities in the next several weeks.

DOWAGIAC — When Dowagiac’s Ester Stanley and the other members of her nonprofit organization, The Stepping Stone, opened the Stone’s... read more