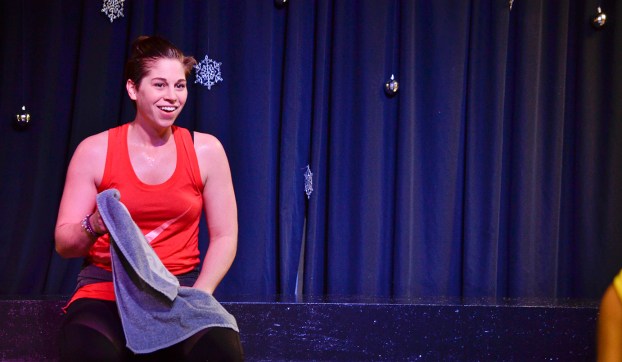 NILES — On Sunday mornings, sounds of modern gospel music waft up the stairs and onto Main Street as parishioners sing praise at Relevant Church in Niles. Now, upbeat music fills the space an additional five days per week as fitness-focused folks dance off calories.

Just in time for the spike in fitness fanatics due to New Year’s resolutions, Niles resident Lacey Peters recently launched her own business, Health and Fitness by Lacey Peters, offering classes inside the church at 210 E. Main St.

“When I first saw the space and energy in the environment and [Pastor] Muta [Mwenya], that sparked interest,” Peters said. “There were so many people in town who were telling me that I needed to meet Muta, and I learned why.”

Relevant Church describes itself as an all-inclusive, welcoming and modern church that helps parishioners find their way to Christ. The church often hosts events and volunteer efforts designed to better the Niles community.

“It’s an industrial space, has lower lighting and has a hip identity,” Peters said, explaining how the environment lends itself to the high-energy fitness programs she offers.

“A lot of people know me through the Y or working at the Y,” Peters said. “People call me ‘that Zumba girl,’ which is funny, but at the same time I’m like, ‘gosh, I’m so much more than that.’”

Peters served as an instructor and leader for more than a decade, and left the YMCA in November in order to spend more time with her family.

Now, in her part-time position as an independent instructor, Zumba is promoting many of her other classes, including PiYo (a Beach Body program that blends Pilates and yoga).

“[Our classes] are for all fitness levels, so I don’t want to make the lower fitness levels feel excluded,” Peters said. “We can customize it for everybody.”

A co-instructor who is also Zumba certified will teach Battle Ropes in the near future. The exercise boosts upper-body strength as participants move weighted ropes in different ways.

“I’m also doing kids hip hop because I have done that in the past and it has been successful,” Peters said.

Peters fell in love with dancing (and later Zumba) as a cheerleader. After high school, she traveled the country teaching cheerleading camps for two years. Now, as a mother of young children, she is excited to again offer affordable dance classes to children ages 4 to 11.

“It’s a six-week session and the classes themselves run once a week, and they’re only 30 minutes,” she said. “I can only really hold their attention for that long.”

The students will learn choreography to upbeat music, and at the end of six weeks, parents and families join the class for a watch night.

“I’m getting quite a bit of interest because it’s the total opposite of a committed, serious program, but they still get quality lessons in a safe environment,” Peters said.

The classes cost $45 for the entire six weeks. Peters said any costumes required will be made out of pieces of clothing students already have at home, such as T-shirts or baseball caps.

Zumba classes are $6 each. Participants are not required to commit to more than one class. Child watch is offered during all adult classes for $1.50 per child.

Details on other upcoming classes, fitness and weight-loss challenges, and other opportunities can be found on Peters’ Facebook page, “Health and Fitness by Lacey Peters.”

One person injured in two-car crash on M-51

NILES — Snowy weather was cited as a factor in an accident that occurred Wednesday afternoon, involving two vehicles on... read more