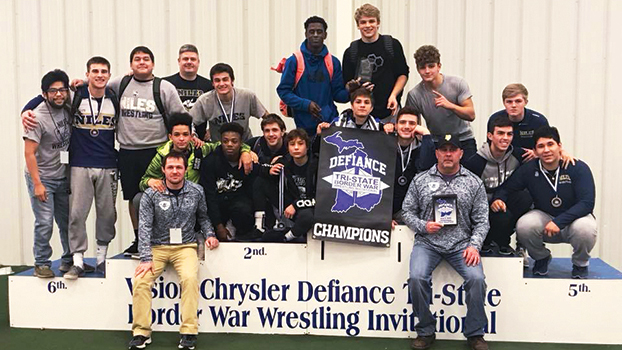 Findlay finished with 155 points, while Swanton, Ohio was third with 146.5 points and Coventry, Ohio and Sandusky, Ohio tied for fourth with 146.

Franco won the 120-pound championship by going 5-0 and was named the tournament’s MVP for wrestlers from 106 to 145-pound classes.

Franco defeated Gavin Manis of Lapel, Ohio in the opening round via a pin, Liam Morrison of Findlay in the second round by major decision and Eric Pawlaczyk of Imlay City in the quarterfinals via a pin.

In the semifinals, Franco won by technical fall over Tyler Bauer of Wayne Trace, Ohio, 20-4.

In the championship match, Franco pinned Mendon’s Nik Andaverde in 1:38.

Davin Simpson at 160 and Dayton Smith at 171 both finished third for the Vikings.

Simpson pinned Colton Soles of Archbold, Ohio in 3:56, while Smith won an 8-3 decision over Quay Brown of Sandusky.

Kody Walker was the lone Dowagiac wrestler to place in the tournament as he was fifth at 120 pounds after defeating Andy Hinojosa of Tinora, Ohio 6-2.

The past year was an eventful one in southwest Michigan, with a variety of extraordinary events taking place throughout the... read more