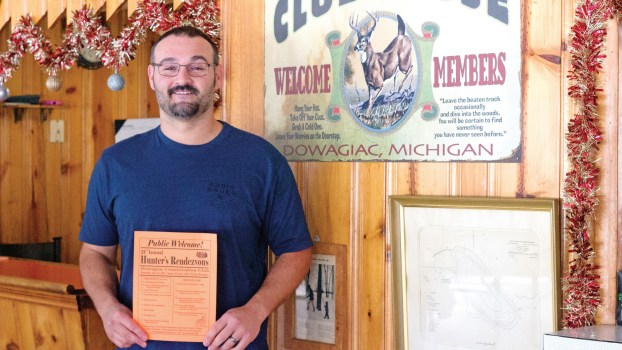 DOWAGIAC — All things related to the great outdoors will be on display at the Dowagiac Conservation Club later this month, as the organization hosts its 21st annual Hunter’s Rendezvous Saturday, Jan. 27.

Organizers will have a litany of activities occurring on the grounds that day, including its big annual raffle. For $5, people may enter a drawing for several big prizes, including a YETI Tundra 45 cooler, a Ruger .450 Bushmaster rifle and the grand prize, a fully-stocked freezer with meats donated by several local farms.

Also returning this year is the event’s silent auction, with items including ski lift passes at Jones’ Swiss Valley, gift cards from Battle Creek’s FireKeepers Casino, boots from Dowagiac’s Underwood Shoe Store and tickets to an upcoming Kalamazoo Wings hockey game. From 1 to 4 p.m., organizers will also be doing several free raffle drawings for children, with prizes including a bow and arrow and hunting firearm.

The club’s trophy barn will also be open, where people may bring in their mounted deer for scoring by one of four judges that morning. People who bring in their deer for display will be entered into a drawing for a Weatherby 12-gauge pump shotgun.

Conservation club members will also be serving deer camp chili and hot dogs for $5. There will also be a trading post set up on site, where people may purchase furs and other outdoor-related items.

All proceeds will go to the conservation club’s youth education programs, including the free hunter safety courses members host several times per year on the property.

Putting together this year’s Hunter’s Rendezvous are Adam Maxey and Craig Lyons, taking over the reins from longtime organizer Richard Atkinson, who is still pitching in to help this year, Maxey said.

Maxey has been a member of the Dowagiac Conservation Club for around three years, and became one of the organization’s board members last year, he said. He also helps with the club’s 3-D archery activity during the summer.

“[The club] needed help putting together this year’s Rendezvous,” Maxey said about why he volunteered to help organize the upcoming fundraiser. “I figured I would donate my time to make it happen.”

The organizers have several new activities on tap for this year’s event, including a pair of photo contests — one for the best picture taken via trail camera, and the other for the best photo featuring a youth sportsman, be they hunting, fishing, mushroom gathering, etc. They will also have a youth turkey calling contest open to children 16 years old or younger.

There will be several demonstrations and activities aimed at younger guests during the event, including a virtual hunting range, Maxey said.

Maxey, a lifelong lover of hunting and fishing, said the Rendezvous is vital for the conservation club’s outreach to local children, who benefit from the various programs the organization runs to promote outdoor recreation in the community. Maxey himself participated in one of the club’s hunter safety courses as a child, he said.

“I would like to see more youth get involved,” Maxey said. “I have two kids myself. I feel like the importance of the outdoors is starting to be lost in today’s day and age.”

The photographers of Leader Publications have shot thousands of pictures through the first five months of the 2017-18 high school sports... read more