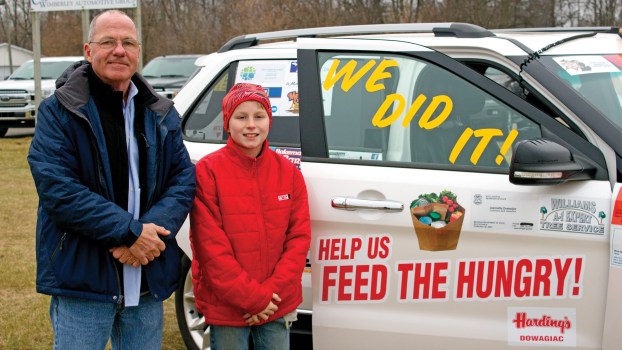 DOWAGIAC — Thanks to the support of people throughout the region, hungry Cass County families will get some much needed help throughout the next year.

The 2017 Feed the Hungry campaign wrapped up its holiday food drive Friday morning, capping off the program with its annual food distribution on the C. Wimberley Ford parking lot.

A semitrailer loaded with hundreds of pounds of food, purchased from the Feeding America food bank in Benton Harbor, was escorted into town by Dowagiac police and fire officials. Volunteers with the public safety departments, as well as with several local food pantries helped unload the truck, taking the food to stock up their supplies over the holidays.

The food items were paid for through the donations collected by Feed the Hungry coordinator Jim Allen and the dozens of volunteers who helped raise money for the drive the last several weeks. This year, organizers set their sights on raising $20,000 for the campaign.

As of Friday afternoon, Allen said they had met that goal — and more — raising around $25,500.

“We blew the lid off our goal,” Allen said.

The organizers only spent a portion of that total Friday for the food delivery, Allen said. The rest will be donated to Dowagiac’s ACTION Ministries, which will use the money to pay Feeding America for its mobile food pantries, which will stop in Cass County periodically throughout 2018.

“Last year, we paid for 19 trucks,” Allen said. “We will do every bit of that and more this upcoming year.”

Allen said that this year’s contributions will pay for around $150,000 worth of food, through the partnership between ACTION and Feeding America, which allows the program to buy food for pennies on the dollar.

Allen credits the hundreds who donated to the program for the success of this year’s food drive, he said. Whether they gave $1 or $1,000, every cent they collected will make a tremendous impact on the lives of local families, he said.

The organizer also thanked the more than 100 people who pitched in with Friday’s food drop, especially the public safety officers who sacrifice a few hours of their time to help, he said.

Allen also gave props to another one of his volunteers on Friday: his 12-year-old grandson, Jesse, who has helped unload the food truck for the past three years. While the promise of a free lunch — and a chance to get a day off school — were certainly enticing, the youth said he likes to pitch in whenever he is asked.

BERRIEN SPRINGS — Even though it was not the prettiest win, the Brandywine Bobcats managed to fend off host Berrien... read more