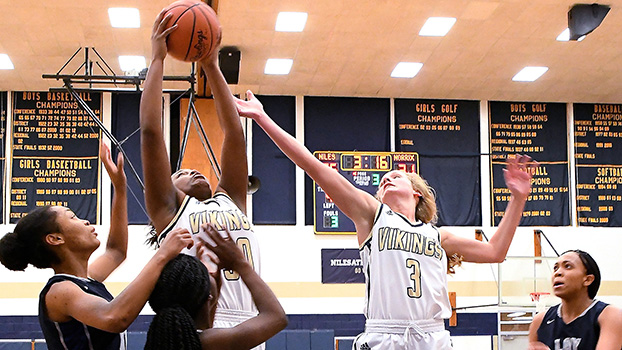 NILES — Behind the sophomore duo of Reese Davies and Alycia Patterson, the Niles girls basketball team defended its home court with a 51-47 victory over visiting Kalamazoo Loy Norrix Thursday night.

Patterson, the Vikings’ starting point guard, led the charge in the first quarter and scored 13 of her game-high 16 points as Niles (2-3) opened up a 24-12 advantage. She also drained a deep 3-pointer as time expired, igniting the crowd.

“One of our goals for this game was to be aggressive offensively,” Niles Coach Jessica Johnson said. “I thought the girls did a great job of that. Our other goal was to play all four quarters and we did not do a good job of that. Unfortunately, it made it a close game at the end.”

Turnovers plagued the Vikings in the second quarter as they committed 11 of them.

The Knights increased their defensive pressure and outscored Niles 9-4 to cut the halftime lead to 28-21.

Davies scored three of her 14 points in the quarter with 10 rebounds, three assists and three steals.

In the third quarter, Loy Norrix gained momentum behind freshman Kiara Harris and sophomore Chyahir Lewis. They combined for eight of the Knight’s 18 points.

The Viking lead was down to one after three.

“Both of them were attacking the basket well,” Johnson said. “We were having a difficult time trying to stop them. We struggled with the penetration.”

Loy Norrix took its first and only lead of the game at 43-42 on a fast break layup with 5:57 left in the fourth quarter. With momentum continuing to shift in the Knights’ favor, Niles played as a team the rest of the way and outscored Loy Norrix 9-4.

Patterson sank 1-of-2 free throws with four seconds remaining to make it a two possessions game, effectively eliminating the Knights’ chances of victory.

“I think the girls tonight saw that by working together they can accomplish things,” Johnson said. “Loy Norrix taking the lead showed the girls confidence and understanding that they can actually fight back and win
a game.”

The Vikings will now have the holiday break to fine tune offensively and defensively, before they host the Benton Harbor Tigers Dec. 5.

KALAMAZOO — The Niles boys basketball team got back on the winning track with a 60-50 win over host Loy Norrix Friday Thursday night.

Niles (3-1) outscored the Knights 14-9 in the third quarter to open up a 43-30 advantage heading into the final eight minutes of play.

CASSOPOLIS — When the time arrived to perform, Cassopolis laced up its dancing shoes and went to work. A 20-0... read more