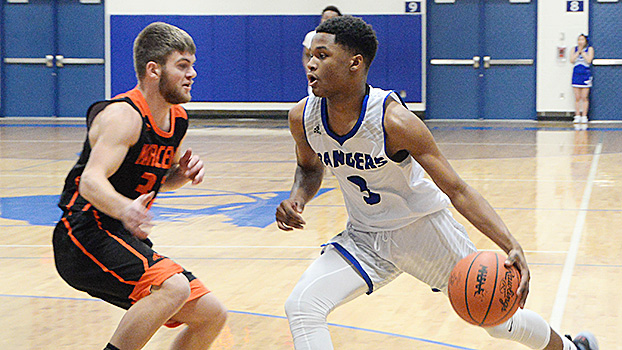 CASSOPOLIS — When the time arrived to perform, Cassopolis laced up its dancing shoes and went to work.

A 20-0 outburst in the third quarter led to an eventual 74-65 victory over Marcellus in a game that resembled a championship title more than a regular conference match-up.

With the win, the Ranger’s boys’ basketball team enters Winter Break with a 3-0 record.

Out of the gate, surprises never stopped filling the court. Both teams were neck-and-neck for much of the contest, despite the stunning run from Cass. And four technical fouls — two by each team — only added fuel to the fire.

Two big debuts also took place for the Rangers. Junior Tyrese Hunt-Thompson and senior Kiambu Gary both took the court for the first time this season. Thompson ended the night with a game-high 29 points for the Rangers and Gary had 19. Both players were on a two-game suspension for non-disclosed reasons.

“There’s a lot going on with this team this season and right now I’m just trying to keep them focused,” Cass coach Ricky Evans said. “So far, we’re doing a really good job of that.”
The Rangers nabbed the 15-11 first quarter lead, but that was shut down by the Bobcats in the second, who entered halftime up 31-25.

The Rangers’ comeback was signaled by three steals, all which resulted in points. Trailing 41-36, Brandon Anderson ignited the spark with a half-court steal and bucket. Gary’s steal, bucket and free throw a mere 10 seconds later tied the game at 41.

An intentional foul on Marcellus put Thompson on the line, who made two successful shots to put Cassopolis up, 43-41. Basket after basket followed, putting Cass up 50-41 enter the final eight minutes.

“When we went into the second half, I put in the quickest team I had and I told them to just go after Marcellus and that’s what they did,” Evans said.

A close comeback by the Bobcats in the fourth was short-lived and during the last minute of the game, when Marcellus had no choice but to foul the Rangers repeatedly until defeat was evident.

“Marcellus was a tough team,” Evans said. “I tip my hat to them. That was not a game we were expecting from them.”

Other top scorers for Cass were Darrion Gatson with 12 and Anderson with 10.

The Rangers hope to keep the spark alive heading into the New Year when they travel to New Buffalo on Jan. 4 for their next game.

SAN DIEGO — We boarded a 747 with the seniors, including myself, were treated with first class seating. We each... read more