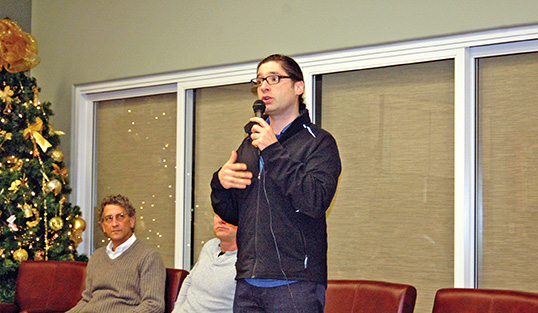 BUCHANAN — The Buchanan Area Senior Center was filled Tuesday evening with many area senior citizens hoping to learn more about a topic that has been dominating the discourse of the city for the last year: medical marijuana.

The senior center invited medical professionals who specialize in the field of medical cannabis to talk to the seniors Tuesday about medical marijuana and answer any questions they may have. Dr. David Dodson, of Minnesota, spoke at the event, along with doctors from Om of Medicine, a medical marijuana clinic that currently operates in Ann Arbor, Michigan.

Officials with the Buchanan Area Senior Center decided to host the event because center officials felt it was important to keep the public informed about the issue of medical marijuana, and to hear input on the issue from trained professionals.

The presentation Tuesday was even more important after all the talk surrounding medical marijuana in the city of Buchanan this year due to the city’s adoption of medical marijuana-friendly ordinances and talk of bringing a medical marijuana facility to Buchanan, said Buchanan Area Senior Center program coordinator Jan Ferris.

“It’s important to inform not just the public in general, but the seniors, and to answer any questions they may have,” Ferris said. “A lot of [the seniors] have questions about it. They go to all the meetings and just didn’t quite understand the benefits of it.”

“Lots of opiods have negative side effects … some drugs even have withdrawals that can kill,” Dodson said. “Medical marijuana doesn’t have that. It is a safer alternative.”

When Om of Medicine took their turn at the event, Dr. Evan Litinas spoke about the benefits of medical marijuana, saying that he has seen the lives of his patients changed by medical marijuana.

“We had a patient whose daughter had epilepsy her whole life. She’s 20 now,” Litinas said speaking about a patient of his. “Now that she has been getting treated using medical marijuana, her seizures have stopped and she has been able to drive.”

Litinas added that many of the stereotypes about medical marijuana being unregulated are untrue.

“We are doctors,” Litinas said. “We work with our patients to find the right doses and help them find what will help them and treat them.”

Litinas concluded his presentation by saying that he hopes to bring Om of Medicine to Buchanan to help treat the conditions of the city’s residents using medical cannabis.

“We want to be here. We are in love with Buchanan,” Litinas said. “We see how we can provide a benefit to the community and I think we would really mesh beautifully here.”

EDWARDSBURG — With a spotlight shining down on her, Edwardsburg High School student Amber Barnosky could not stop a flow... read more