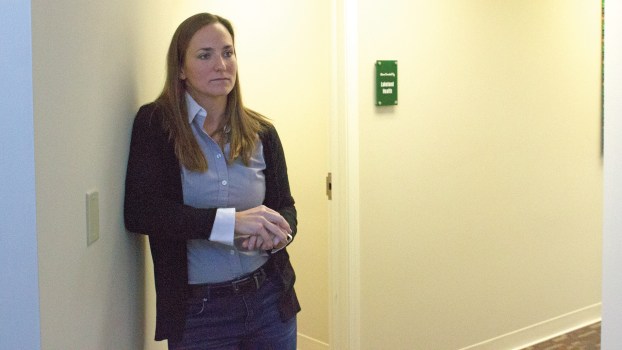 Brook Thomas, a forensic interviewer with the Berrien County Children’s Assessment Center, gives a tour of the St. Joseph-based facility earlier this month. The agency staff coordinates interviews in a safe, relaxed environment with children who are suspected to have been sexually abused. (Leader photos/TED YOAKUM)

Correction: The original version of this article listed the incorrect year of the United Way’s most recent annual report. It has been corrected below.

Recently, members of the Leader Publications staff joined the United Way of Southwest Michigan on a tour of several agencies the nonprofit organization supports through grant dollars, including the Berrien County Council for Children, Big Brothers Big Sisters of Berrien & Cass and the Niles Salvation Army. Through United Way funding, these three groups are able to make a difference in the lives of people living in Niles, Buchanan, Dowagiac, Cassopolis, Edwardsburg and other communities in the dual county area.

Over the next three days, we will profile these agencies and how they work to make southwest Michigan a better place to live, work and raise a family.

All children deserve a sense of comfort and peacefulness — especially those who have been subjected to unspeakable abuse at the hands of an adult.

Thanks to the support of the community, the staff with the Berrien County Children’s Assessment Center are able to give these children some tranquility during a turbulent time in their lives.

With rooms filled with comfy furniture, stuffed animals, toys, sports memorabilia and other items, the assessment center, located in St. Joseph, provides youth with a safe place to share their stories with others, in order to help bring their abusers to justice, and to help them take their first steps toward healing.

Thanks to contributions from the United Way of Southwest Michigan, the assessment center, run by the Berrien County Council for Children, is open to children in Berrien, Cass and Van Buren counties, at no cost to their families.

The Berrien County Council for Children is one of 34 agencies in Berrien and Cass counties the United Way supports through its funded partner program. Every three years, the nonprofit — with the support of the members of the community — selects which area agencies it will award grant dollars to in order to advance the organization’s mission of enhancing education, income, health and basic needs of residents living in the two-county area, said Charlotte Rogers, director of the agency’s annual campaign.

At the beginning of every funding cycle, the United Way divvies up donations made to the nonprofit to area agencies that apply for aid, based on their level of need and the impact they can make in the community. Over the three-year life of the grant, United Way staff track how the agency’s dollars are being used, and how they are making a difference in the lives of their neighbors.

According to the United Way of Southwest Michigan’s 2016 annual report, more than 72,600 residents — or 1 in 3 people living in Berrien and Cass counties — were directly impacted through programs funded by the United Way.

“I’m a United Way donor myself,” Rogers said. “I’m passionate about so many causes. By giving to United Way, I know that my dollars are supporting a lot of great things.”

In addition, many agencies are able to use United Way funding to leverage additional dollars from state or federal programs, Rogers said. Over the past five years, the United Way’s funded partners have been able to bring in nearly $14 million worth of additional dollars to support their efforts.

“Your dollars are being multiplied and stretched when you donate to us,” Rogers said.

All donations made to the United Way of Southwest Michigan are used to support people in Berrien and Cass counties, Rogers added.

The center’s main purpose is to conduct forensic interviews with children who are suspected to have suffered sexual abuse.

Brook Thomas is one of the agency’s interviewers. She attempts to get children to open up about their experiences inside one of the center’s safe rooms, while local law enforcement officials, prosecutors, child protective service agents and other parties monitor the conversation from behind a one-way mirror.

Not only does the process allow various parties involved in the investigation to collaborate in one place, but it also gives children a more comfortable environment to open up, rather than being interviewed in a cold interrogation room or in the back of a squad car, Thomas said.

“It reduces the amount of trauma on the child, and also the odds of their story getting skewed, which would weaken the case for prosecutors,” Thomas said.

All Berrien County children under the age of 13 who law enforcement or child protective services believed to have suffered abuse are required to be interviewed at the assessment center, Thomas said.

“Everyone takes pride in this place,” Thomas said. “Working in any human service is a difficult, but rewarding job. You get to help children begin the healing process. Just by telling their story, you can help them move forward.”