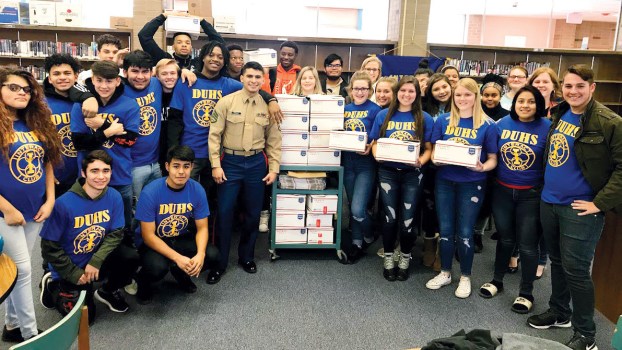 DOWAGIAC — Thanks to the generosity of a community thousands of miles away, a group of U.S. Marines serving their country in Afghanistan will receive some special gifts from home this holiday season.

Members of Dowagiac Union High School’s Rotary Interact club recently packed 30 care packages for a platoon of Marines with Task Force Southwest, who are currently stationed in Camp Shorabak in the Central Asia nation. The boxes, which will be shipped overseas by members of the Blue Star Mothers of Southwest Michigan 179, based in Paw Paw, contain several items for the servicemen and servicewomen, including canned goods, meat sticks, hygiene products, tissue paper and hair ties.

“The students focused on the little things that we take for granted over here that would make a big difference to [Americans] stationed overseas,” said Brandi Zoll, a counselor with Dowagiac Union Schools who serves as the sponsor of the high school service organization.

The 38 Interact club members prepared the boxes last Monday, transforming the high school media center into a makeshift workshop for the operation, Zoll said. Helping the students out was Marine Sgt. Daniel Garcia, a recruiter who assisted the club in coordinating the donation.

Garcia — who has spent several Christmases serving overseas himself — said that military personnel always love to receive gift packages from strangers back home, which lets them know their sacrifices are being appreciated by the men and women they are tasked with protecting, Zoll said.

Members of the Dowagiac Interact club — an offshoot of the famed Rotary International service organization that is designed to teach leadership to teenagers through community service — made care package donation their first charity project of the new school year, Zoll said. Wanting to make an impact not just internationally, but also locally, the club contacted Garcia, who often visits the school on recruiting duty, to ask if he knew any Marine units stationed overseas who had troops hailing from the southwest Michigan area. Garcia told them that Task Force Southwest, which was deployed to Afghanistan earlier this year, was one such unit, Zoll said.

“The sergeant said that a lot of the men and women the students were helping are only a few years older than them, and may have even once sat at the same tables they were [on Monday],” Zoll said.

“I think all of the credit should go to the hard-working members of the DUHS Rotary Interact club,” Zoll said. “Their dedication to community service fueled the successful completion of this project, to give back to our service men and women.”

Correction: The original version of this article listed the incorrect year of the United Way’s most recent annual report. It has... read more