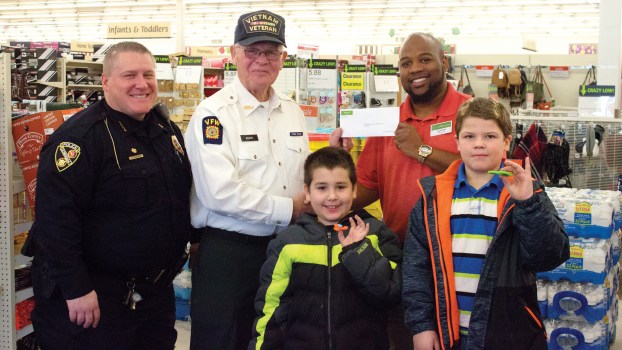 With Dowagiac firefighter Bob Smith pulling a shopping cart full of stuffed animals, plastic dolls and toy babies behind him, the third-grade Kincheloe Elementary student zipped between the aisles of the Dowagiac Shopko department store, excitedly hunting for items for the people on his Christmas shopping list: his mother, his two sisters and his younger brother, to be precise.

At the end of his excursion, he and Smith piled their bounty onto the conveyer belt at the checkout line, as Hoyt told the clerk ringing up the items which person he would be giving them to for Christmas. Afterwards, the boy and his shopping companion rolled their shopping cart over to a nearby table, where volunteers with the local Veterans of Foreign Wars were wrapping gifts.

When one of the volunteers grabbed a giant blue box of Pokemon trading cards from the basket, Hoyt was quick to tell her to whom that particular gift would be going.

“This one is to me,” he said, while writing “To: Javier, From: Javier” on a white-and-green colored gift tag in front of him.

With a long morning of shopping behind them, Hoyt thanked Smith in the best he knew how: by splitting one of the red-striped candy canes he had bought with the firefighter, which they shared together near the entrance of the local store.

Hoyt was one of 10 Dowagiac elementary students who got the chance to purchase $200 worth of Christmas gifts for themselves and their loved ones during the VFW’s annual “Shop with a Hero” event Saturday. Helping the children roam the aisles of the store were members of the Dowagiac police and fire departments, including Director of Public Safety Steve Grinnewald and Deputy Police Chief Jarrid Bradford. The department’s K-9, Tole, also got in on the fun, hanging out near the entrance of the store after his handler, Officer Kevin Roman, helped 10-year-old Tristan Pence shop that morning.

For the man heading up the program, VFW Post 1855 Commander Bill Bobik, the program is all about giving children a chance to not only do something special for their families this holiday season, but to also allow them to meet local police officers and firefighters in a friendly and happy environment, he said.

“I like the rapport between the kids and the police officers,” Bobik said. “It shows these kids that these officers are their friends. I feel that’s a very important lesson to learn.”

The VFW has partnered with Shopko to sponsor “Shop with a Hero” since the chain of department stores took over the former Pamida storefront on Pokagon Street in 2012, Bobik said. Every year, the store’s foundation gives a $1,000 grant for the program, which the VFW and Dowagiac public safety department matches with community donations, including the funds from the dunk tank the police department sets up during the city’s annual summer festival.

The combined $2,000 allows the organization to pay for $200 shopping cards that a group of students — selected by administrators from the district’s four elementary schools — to use to buy Christmas gifts, Bobik said.

After the shopping excursion, the public safety officials join the children for a pizza party at the local VFW branch.

Smith, an on-call lieutenant with the Dowagiac Fire Department, has participated in “Shop with a Hero” since the VFW began organizing it years ago, he said.

The firefighter said he enjoys the fact that he can help children buy gifts for their families, which is something he thinks that most children do not get a chance to do until they are older.

“Most kids are pretty good,” Smith said. “They always remember to buy things for the rest of their family, not just for themselves.”