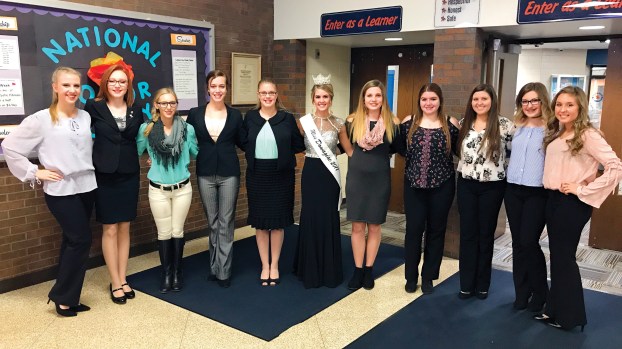 DOWAGIAC — People looking to get a front row seat to one of Dowagiac’s most celebrated evenings will have a chance to do so beginning Tuesday.

Tickets to the Miss Dowagiac 2018 Scholarship Pageant will open for sale from 6 to 8 p.m. that evening inside the front atrium of Round Oak Revisited restaurant, 137 S. Front St., Dowagiac. Tickets cost $15 per person, with customers having a chance to select which seats inside the Dowagiac Middle School Performing Arts Center they want to reserve on a first-come, first-serve basis.

Ticket buyers who want to stick around and grab a bite to eat at the restaurant will be in luck, as Round Oak will give a 10 percent discount on ticket holders’ bills that evening (some items excluded).

This is the first year that the Miss Dowagiac Pageant has hosted its opening day of ticket sales at the downtown restaurant, which opened in July 2016. Organizers try to host the event each year at different businesses in the community that support the pageant, with prior opening days taking place at establishments like The Baker’s Rhapsody or Caruso’s Candy & Soda Shop, said Miss Dowagiac Pageant Director Jessica Voldrich.

“Round Oak has been a great supporter of the pageant since it opened, so we were elated when they agreed to host this year’s sales,” Voldrich said.

The pageant also decided to move opening day to later in the evening to give people who cannot make it during the morning or early afternoon a better chance of getting their hands on the best seats for the upcoming show, Voldrich said.

After Tuesday, tickets may be purchased at the Greater Dowagiac Chamber of Commerce office, located inside the historic downtown train depot, at 200 Depot Drive.

The 79th annual Miss Dowagiac Scholarship Pageant will be from 7 to 9 p.m. Saturday, Jan. 13, at the Dowagiac Middle School Performing Arts Center, 57072 Riverside Drive. Ten young women will be competing for the crown that evening, including:

Since signing up for the pageant in October, the contestants have been involved in a number of activities to prepare for the event, including helping host a fundraiser at Zeke’s restaurant last month, participating in the city’s Candle-light Christmas Parade, and volunteering with the St. Paul’s Episcopal Church kitchen, Voldrich said. Next month, the teenagers will begin rehearsing for the pageant.

The Miss Dowagiac 2018 pageant will feature the theme of “Fearless,” with a modern chic set, Voldrich said. The contestants’ platforms will focus around a historical or contemporary figure who exemplifies the trait of fearlessness.

Returning to serve as master of ceremonies for the upcoming pageant will be area radio personality Joe Jason. Miss Dowagiac 2016 Anne Zebell will sing during the event, and dancers with Dowagiac’s Miss Michele & Co. will also perform a routine for audiences.

Thanks to local donors, the pageant will award $8,500 in college scholarship dollars to the top contestants this year, Voldrich said.

“It is incredible to know that we are supporting the educational futures of young women in our community,” she said. “There are not many communities out there that can award that amount of money through their pageant system. We can because of the generosity of our donors.”

For more information about the pageant, people may email missdowagiacscholarshippageant@gmail.com or may call the Greater Dowagiac Chamber of Commerce at (269) 782-8212.

CASSOPOLIS — A man prosecutors said had committed an “unspeakable horror” upon a family has been handed a lengthy prison... read more