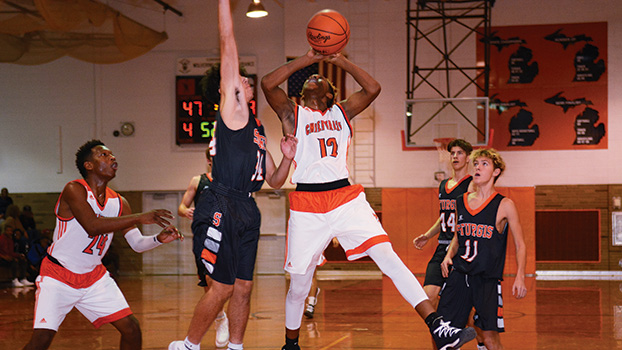 Dowagiac’s D.J. Lanier tries to get off a shot against Sturgis in the Chieftains’ 60-52 win over the Trojans. (Leader photo/SCOTT NOVAK)

DOWAGIAC — A 22-point lead was almost not enough for the Dowagiac boys basketball team Friday night.

The Chieftains led visiting Sturgis by 22 points in the third quarter before the Trojans mounted a fourth-quarter comeback that fell just short.

Dowagiac was able to hold on for a 60-52 victory in the Wolverine Conference South Division opener for both schools. The Chieftains are now 2-1 overall, while the Trojans fall to 1-1.

The two teams played an even first quarter, with Dowagiac grabbing a 16-13 lead.

The Chieftains outscored Sturgis 29-16 in the second and third quarters to open up a 51-32 advantage heading into the final eight minutes of the contest.

All the things Dowagiac did well for the first three quarters, like sharing the basketball, taking good shots, rebounding and pressure defense, went out the window in the fourth quarter.

“We were really good for three quarters,” said veteran Dowagiac coach Danum Hunt. “That is the type of Dowagiac basketball I am used to seeing, and that is what we are striving and working to do for four quarters. The fourth quarter, there we kind of went to sleep and fell apart.

“Even though we won, we did not complete the game the way we would have liked to. Our free throw shooting was atrocious. We most definitely have to improve there. One another night if we are put into that same situation we could end up with a loss.”

Dowagiac missed nine consecutive free throws at one point in the fourth quarter after the Trojans had used a 7-0 run to open the period, which got the team back into the game.

Sturgis continued to whittle away at the lead as turnovers, rushed shots and missed free throws allowed the Trojans to close the gap to 57-50 with less than a minute to go.

Dowagiac, though, was able to regain its composure and hold on for the victory.

“Unintentionally, we slowed down the ball and that gave them an opportunity to make a run and get back in the game,” Hunt said. “For three quarters, we had some success making them play our style of basketball. In the fourth quarter, we fell into a funk, but we are going to go back and fix that, and work on playing a full 24-minute game.”

Dowagiac was led by J.J. Smith and Shaquan Stanback’s 12 points, while Trae Brookins finished with 11 points and Jamin Hunt with eight.

Brecken Stewart led Sturgis with a game-high 35 points. Thomas Kurowski had nine points for the Trojans.

The Chieftains will regroup and head to Stevensville for a nonconference game against Lakeshore. Dowagiac heads to Edwardsburg for another Wolverine South makeup on Thursday.

The game is scheduled to begin at approximately 7:15 p.m.