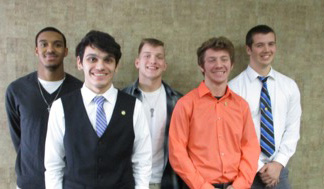 CASSOPOLIS — The Captain Samuel Felt Chapter of the Daughters of the American Revolution met Dec. 11 for its annual Good Citizens Tea.

The room at the Cass District Library was filled with parents, administrators, guests, The Marcellus High School Jazz Band and DAR members.

These students were chosen by their teachers and their peers because they best demonstrated the qualities of dependability, service, leadership and patriotism, in their homes, schools and communities.

Each Good Citizen who participates in the scholarship portion of this award is required to obtain two letters of recommendation, provide a transcript and create an outline of information about themselves, school experiences and how their lives reflect the four qualities of a DAR Good Citizen.

In addition, the candidate is given an hour to write an essay, without assistance or the use of any reference materials. Their application is submitted to three non-DAR judges, who have the task of selecting one student. The winning essay and paperwork are next forwarded to the state chairman for
further competition.

• Brandon Anderson is a senior at Cassopolis-Ross Beatty High School. Brandon is a National Honor Society student and has maintained a four year “A” honor roll standing. He will look to attend the University of Michigan to pursue a degree in business marketing.

• Justin Lyle is a senior at Dowagiac Union High School. Justin is the current president of his school’s National Honor Society, and has been his class president from ninth to 12th grade. He is presently the student in line to be valedictorian of his graduating class this year, with a 4.0 GPA. Justin is looking at both Eastern and Central Michigan universities for his career study in sports science.

• Luke Smous is a senior at Edwardsburg High School. Luke is of president of his senior class, the Student Council and the National Honor Society. He takes Advanced Placement classes and attends the Berrien County Math and Science Center. Luke wants to major in either engineering or biology at either Notre Dame or the University of Michigan.

• Emilio Zapata is a senior at Lawrence High School. Emilio is treasurer of his class, a member of the National Honor Society and is soon to become an Eagle Scout for his work improving the park in Lawrence. He is also the lead percussionist in this school band. Emilio plans to study mechanical engineering with the intentions of designing machines that will enhance our lives.

• Trent Henry is a senior at Marcellus High School. Trent has held a class office all four years of high school and is the current vice president. He is a member of the National Honor Society and Spanish Honor Society, as well as captain of his baseball team and a quiz bowl member. Trent wants to attend Michigan State University to major in psychology with a minor in communicative science and disorders. He hopes to become a speech pathologist.

Officials said they were proud of the young people, whose presentations demonstrated their dependability, leadership and patriotism in their homes, schools
and communities.

The students’ names will be sent to the Michigan State Society, along with the winners of the other 51 chapters across the state. The state will then choose the top 10 winners, which will be announced at the chapter’s March 12 meeting.